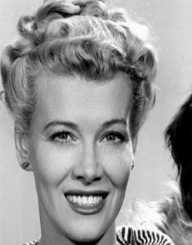 Penny Singleton was an American actress best remembered for her role in Blondie, a comic strip. During her sixty-year career as a comic strip character, Singleton managed to appear in 28 motion pictures.

Her activity in the union affairs led to her to become the first female to take office as the president of AFL- CIO.

Penny Singleton was born on 15th September 1908, in Philadelphia. She was born to an Irish- American, Benny McNulty. Her acting career began when at a small age, doing songs in a silent movies theatre.

Together with Milton Berle, who she was friends since childhood, she participated in song and dance; they both appeared on Broadway, The Great Temptation.

She on many occasion visited roadshows and nightclubs where she danced and sang.

In the 1920s, Penny Singleton began using her birth names Dorothy McNulty in her musical career. Her first roles as a professional actor came when she was given roles to play in the Broadway production. She took a role in musical Good News in 1927. Her singing abilities were best showcased when she featured in film Flo in 1930.

In most films, her role as a seductive female character suited her most. She featured in many films after her feature in After the Thin in 1936.

Penny Singleton's acting career hit new levels in 1938, when she played a role in Blondie, with her dyed hair, Singleton played her role with a lot of perfection. Blondie film was produced in 28 episodes, between 1938 and 1950.

Between 1962 and 1963, she took up television role in an animated series playing the voice of Jane Jetson.

In 1937, Penny Singleton married Dr. Laurence Scogga who worked as a dentist. The couple however divorced in 1939. Three years later she married Robert Sparks, and they stayed together until his demise.

Her father worked as a newspaper typesetter. She had two daughters, each from the two marriages.

Penny Singleton was active in the affairs concerning union affairs of American Guild of Variety Artist. Singleton led Radio City Rockets to a one month strike demanding better working conditions for the members.

Her role in the strike propelled her to the presidency of the union in 1969.

At the age of 95, Penny Singleton was diagnosed with respiratory failure and later stroke which led to her death on November 12, 2003.