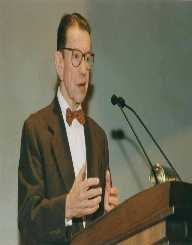 Paul Simon was born on November 29, 1928, in Illinois, USA. His parents were Ruth Tolzman and Martin Simon.

As a teenager, Paul Simon attended Concordia Academy High School. While not at school, his parents, who were deeply involved with the Lutheran church, taught him Lutheran values.

After graduating from high school, Paul Simon went on to enroll in the University of Oregon. He later transferred to Dana College. However, he dropped out of college before he could earn any type of degree.

In 1948, Paul Simon bought the Troy Call newspaper but renamed it the Troy Tribune. Since he owned the paper, he could have his writers about the issues that were important to him. He called out groups that committed crimes, that worked against the government, and who participated in legal but still immoral activities.

Paul Simon began his political career in 1955 when he ran for a seat in the House of Representatives. He won the election and held a seat for his state of Illinois.

In 1963, Paul Simon ran for state senate. He was elected to the Senate (for Illinois) later that same year. In this same year, he also helped to create the Illinois Arts Council. He stayed in this post until the end of his term in 1969. In this same year, he became the Lieutenant Governor of Illinois. In this position, he had the chance to participate in the constitutional convention. While here, he helped to create the current Illinois State Constitution.

In 1974, Paul Simon was elected to Congress. He served in this position for four terms, until 1982. In 1984, Paul Simon was elected to the Senate. He was re-elected in the same post in the next election in 1990. During this time, in 1988, Simon tried to run for president but failed. During this time in his career, he was known to be extremely opposed to President Clinton as well.

Paul Simon officially retired from politics in 1996. In this year he began teaching political science along with humanities subjects at Southern Illinois University. Later, he began working as the director of the Public Policy Institute at the same university.

During his political career, and afterward, Paul Simon devoted much of his time to writing books, mostly on the topic of politics. Some of his most famous works are listed below.

A Hungry World
You Want to Change the World? So Change It
The Tongue-Tied American
The Politics World Hunger (written with Arthur Simon)
Lincoln’s Preparation for Greatness: The Illinois Legislative Years

Paul Simon won the Best Legislator Award seven times between 1954 and 1996. Paul Simon was given the Order of Lincoln from the Lincoln Academy of Illinois in 1998.

Paul Simon died on December 9, 2003, in Springfield, Illinois, USA. His cause of death was complications due to heart surgery. He was 75 years old when he passed away.