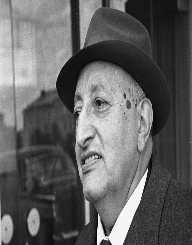 Chilean poet Pablo Neruda was born on the 12 July 1904 in Parral, Chile. His parents were Rosa Basoalto, a teacher and Jose del Carmen Reyes Morales who worked on the railways. Neruda's mother died when he was an infant. As a young boy, Neruda showed a sensitivity towards language and started composing poems.

After graduating from high school, Pablo Neruda relocated to Santiago to study languages at the University of Chile. He intended becoming a teacher but instead concentrated on writing poetry.

At the age of thirteen, Neruda had his first poem published in a local newspaper and afterward continued publishing in newspapers and magazines. In 1919 he won his first literary prize when he came third in the Juegos Florales del Maule competition. In 1921 Neruda was introduced to Don Carlos George Nascimento, a publisher who took an interest in his writing and published Book of Twilights (1923) which was followed by Twenty Love Poems and A Desperate Song. These two publications were well received and made is name as a poet internationally.

Once established as a poet Neruda continued publishing including The Attempt of the Infinite Man and The Inhabitant and His Hope, but by 1927 he was in dire financial straits. He took up a position as an honorary consulship in Burma which at the time was a British colony. He held various diplomatic posts including working in Singapore, Buenos Aires, Barcelona and Madrid. At the same time, he continued writing and mixing in literary circles. When the Spanish civil war broke out, Neruda became a Communist and published Spain in Our Hearts in 1938. He subsequently lost his diplomatic position because of his political activism. Later, he was made special consul for Spanish immigrants in France.

He was then appointed Consul General in México and in 1943, he returned to Chile. He began his political life in Chile when he joined the Communist Party of Chile, and in 1945 he was elected a senator. From 1947 onwards, because of his opposition to the president's policy against striking miners, Neruda had to live underground until escaping in 1949. He lived in various European countries before he returned to Chile in 1952. In 1953 he organized the Continental Congress of Culture, and in 1972, he was working as the Chilean ambassador in Parish. He resigned in 1973 and returned home.

Neruda won International Peace Prize, the Lenin Peace Prize (1953) and the Nobel Prize for Literature in 1971.

He married Marika Vogelzang in Java, and they had a daughter together Malva Reyes who was born in 1934. The child had health problems and died young. The couple divorced in 1936. Pablo Neruda died on the 23 September 1973. Originally it was said that he had died of a heart attack, but a government report in 2015 concluded that he had died after ingesting a substance administered by injection at the Santa Maria Clinic.
Pablo Neruda left a memoir; I Confess I Have Lived.