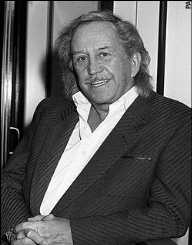 Paul Raymond was born in Liverpool, England as Geoffrey Anthony Quinn on November 15, 1925. He grew up with his mother after his father left when he was five years. He went to the Roman Catholic St. Francis Xavier’s College. He moved from Liverpool to Derbyshire at the start of WWII. He joined another Catholic school run by the Irish Christian Brothers.

He left high school at the age of 15 before graduating. He got a job as a clerical messenger at the Manchester Ship Canal office. He resigned from the job to join the entertainment industry. He performed with various musical bands as a drummer. He skipped enlisting in the compulsory National Service on the pretext of a poor heart condition. He entered into a bargain with the authorities to avoid going to jail. He agreed to do community work as a switchboard operator. He completed his community service and sought another career. He changed his name from Geoffrey Anthony Quinn to Paul Raymond and played a psychic reader in Clacton, Essex. He was 22 years of age.

Raymond formed a theater group with preference to nude performances. Britain had a law prohibiting nude performance son theater stages. The nude actors could only be presented on stage as statues. He opted to stick with presenting the nude actors as statues. He recruited women with specific body measurements. He auditioned for women within the age of 18 to 30 years, 5 feet 8 inches in height. Their chest circumference fell within 36 inches. He then presented his adults-only theater productions with the nude women posed on the stage as statues. He became extremely popular with revelers in London.

He opened the strip club Raymond Revuebar in 1958 in the Soho district of London. To avoid the closure of the club, he registered it as a private club. The members of private clubs were not censored by the nudity law. The membership of the club grew rapidly. By the end of the second year, the club had registered 45,000 regular patron members. As the business fortunes grew, Raymond entered into a freehold agreement for the premise that housed the club for GBP 14,000.

The club became a target of police surveillance. Raymond appeared in court on several occasions for the alleged indecent performances at the club. In 1961, he paid a fine in magistrate court for allowing male revelers to ring the miniature bells to female stage performers. He was also accused of allowing a performer to swallow a small snake. The allegations were never proven, yet he paid a fine of GBP 5,000.

As the club business came under regular police scrutiny, Raymond decided to diversify into publishing. In 1964 he founded the adult men magazine, King. The publication ceased its production after only two issues. He bought the adult magazine Men Only in 1971. He managed to stabilize the production of the magazine into commercial success. Raymond eventually expanded his publication business by adding other magazines like British porn magazine Razzle, and the adult men magazine Mayfair. He featured popular models as cover girls and boys on most of his magazines. The magazines were edited under the umbrella company called the Paul Raymond Publications.

In 1974, he returned back into the theater business. He took over the lease of Windmill Cinema. Raymond reverted to using the theatre’s previous name Windmill Theater. He bought other theaters in London including the Whitehall Theater and Royal Theater. Whitehall Theater became popular for staging the sexual comic play Pyjama Tops. The sexual comic show went on stage for five years. Raymond also added the Boulevard Theater which became a subsidiary of the Raymond Revuebar Club.

In a bid to increase his foothold in the property business, Raymond invested in property buildings within the Soho district of London. He founded his property company called Soho Company that explored and purchased free leasehold properties all over London. During the 1970s, he bought properties in Soho, Chelsea, Hampstead, and Kensington.

His business competitors bombed some of his establishments in the guise of Irish Republican Army fighters. Raymond reported some extortionists to the London Metropolitan Police.

In his late years, he incorporated his daughter Deborah into his business. She died on November 5, 1992, following a heroin overdose. Raymond gradually went into seclusion. He lodged at a home for the aged in London leaving the daily operations of the estate to his family. He died of chest complications on March 3, 2008, in London. Fawn and India, his two granddaughters inherited the over GBP 650 million estates. He was considered one of the richest men in London.

On April 26, 2013, the film The Look of Love premiered in London. The film director Michael Winterbottom used the Paul Raymond Publications employees in the film to give it a realistic touch.