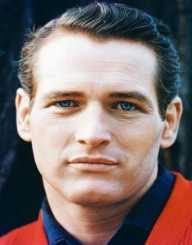 Paul Newman was born in Shaker Heights, Ohio. Newman’s father Arthur was a German Jew and was a sports store owner Cleveland, Ohio. He died in 1950. Newman’s mother Therese was born Humenné, Slovakia. She died in 1982. Newman had a brother, Arthur Jr.

Educated at Shaker Heights High School, Paul Newman graduated in 1943 and enrolled at Ohio University. He left shortly afterward and did not graduate. Later, after WWII, he attended Kenyon College in Gambier, Ohio (1940). He also studied at the Yale Drama School. He intended to become a drama teacher.

During WWII, Paul Newman served as a US Navy torpedo bomber radio operator (1943-1946). He married Jacqueline Witte, and they moved to Cleveland; where they managed the family store. Newman did not want to be tied down with the business, and the family moved to moved to New York. He did television work and also had a part in a science fiction series Tales of Tomorrow (1952). Next, he was an understudy in a Broadway production of Picnic (1953-1954), and it was here, in 1953, that he met Joanne Woodward, who was also understudying. Newman and Joanne became friends.

Paul Newman’s Hollywood debut was The Silver Chalice (1954). He was miscast, and the film was a failure. There is an iconic photograph from the film, of the handsome Newman, dressed in a Roman tago. He returned to Broadway in 1955, starring in The Desperate Hours. He acted in television including The Battler (1955) and Bang the Drum Slowly (1956). Returning to Hollywood, he vied with James Dean for a part in East of Eden. Later in 1956, he starred as boxer Rocky Graziano in Somebody Up There Likes me. In 1957, Paul Newman starred in The Long Hot Summer. His co-star was his future wife, Joanne Woodward. The Left Handed Gun saw him playing Billy The Kid. Newman then starred opposite Elizabeth Taylor in Tennessee William’s Cat on a Hot Tin Roof (1959) This garnered Newman his first Oscar nomination. Newman returned to Broadway in 1959 to star in Sweet Bird of Youth.

At the beginning of the 1960s, Paul Newman was an established, bankable star. Films in the sixties included Exodus (1960) - a biblical story; he also played a musician in Paris Blue. The Hustler (1961) was hugely popular and earned him a Bafta award for Best Actor. The Hustler heralded a period of maturity in Newman’s career. Films that followed including classics such as Cool Hand Luke (1967) and Butch Cassidy and the Sundance Kid (1969). He also starred in and directed his first movie: Rachel, Rachel (1968).

During the 1970s, he continued working in Hollywood. Two films from this time standout. The Sting (1973) with Robert Redford and The Towering Inferno (1974). Both successful at the box office and reinforcing Newman as a charismatic star.

Films in the 1980s included Paul Newman starring in the absence of Malice (1981) And The Verdict (1982). He won Academy Award nominations for both these films. The Color of Money with Tom Cruise was hugely successful. And for which, he finally won an Oscar. Paul Newman continued working, some of his films in the mid to late 1980s were mediocre and did not get much attention. He took time out from acting but returned in 1994 in The Hudsucker Proxy and Nobody’s Fool. He won another Oscar nomination in 1995 for Nobody’s Fool. His final works included Baseball (1994) and a TV series about motor racing in 1997.

Paul Newman was nominated for an Academy Award eleven times. The nominations ranged from Cat on a Hot Tin Roof (1959) for Best Actor to winning the Best Actor in 1987 for The Color of Money. He was also nominated for Best Picture for Rachel, Rachel (1969) which he directed and starred in. As well as the Academy Award nominations, Newman was nominated for thirteen Golden Globe awards, including winning the New Star of the Year: Best Actor in 1956. He went on to win the Golden Globe: Best Director (1968) for Rachel, Rachel. He also won a Golden Globe: Honorary Award in 1984 and a Best Supporting Actor: Television (2005) for Empire Falls, a miniseries.

Paul Newman was married young to actress Jacqueline Witte. The couple had three children: a boy Scott (b.1950-d.1978) and two daughters: Stephanie (b.1951) and Susan Kendall Newman (b.1953). He divorced Jacqueline in 1958, and Paul Newman married Joanne Woodward the same year. Newman and Woodward had three daughters: Elinor (b.1959) Melissa (b.1961) and Oliver (b.1968). The couple bought a property Westport, Connecticut and settled down there. They stayed married until Newman’s death in 2008.

Scott Newman, Newman’s only son from his first marriage, died suddenly in 1978. He had been battling a serious alcohol problem. Newman was deeply affected by the loss of his only son and set up a clinic in his honor.

His mother, who was a Roman Catholic came from Hungary. Newman’s mother switched from Catholicism when Paul was young. Later in life, Paul Newman chose to follow the Jewish faith.

Paul Newman was a motor enthusiast. In 1979 he came second in the famous 24-Hour Le Mans in France.
In 1995 he participated in the 24 hour Daytona, the oldest person at the time to have done so.

Paul Newman donated millions to charities through his Newman Foundation. For instance, he set up a scholarship at his former college by donating US$10 million.

After the death of his son Scott Newman in 1978, Paul Newman established the Scott Newman Clinic. The object of the center is to educate people about the dangers of drug and alcohol use. The clinic runs a series of programmes.

Since 1982 over $400 million has been donated to charities from Newman’s Own Foundation. This foundation was set up in 2005 by Newman. The work continues as all profits and royalties from the sale of Paul Newman’s Own and Newman’s Own product are plowed back into charities worldwide.