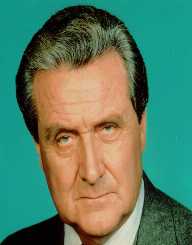 Daniel Patrick Macnee was born on 6th February 1922. He was born in Paddington, London, in England, to Daniel and Dorothea Macnee. Macnee was the older of two boys. Macnee studied at Summer Fields School and then enrolled at Eton College. He was in the Officer Training Corps while at Eton.

Patrick Macnee sold pornography and was also a bookmaker to the other students. Eton expelled Macnee for his actions. He enrolled at Webber Douglas Academy of Dramatic Art where he studied acting.

Before Macnee could take part in his first performance, the Armed Forces called him up. He joined the Navy in 1942. Working his way through the ranks, in 1946, Macnee left the Navy a lieutenant.

Patrick Macnee began acting in film and on television. Although he performed in many small roles, Macnee found his career wasn't progressing. In the late 1950s, Macnee took a break from acting. As a result, he turned his hand to producing. He worked on a series of documentaries called The Valiant Years, based on Winston Churchill's memoirs.

While Macnee worked on the documentaries, he won his role in The Avengers. The show began in 1961 and continued through until 1969. Macnee appeared in 159 of the 161 episodes and was best-known for his work on The Avengers.

During his time on The Avengers, Patrick Macnee co-wrote two novels. The novels were called Dead Duck and Deadline. Macnee also played an essential role in the James Bond movie, A View to a Kill (1985). Between 1938 and 2003, Macnee worked on 40 films. His films included The Avengers (1998) and King Solomon's Treasures (1979).

He also made guest appearances in 41 television shows or movies between 1953 and 2005. These included series like The Love Boat, Murder, She Wrote, and Magnum. P.I. Macnee was also in Battlestar Galactica (1978).

During 1972 and 1973, Patrick Macnee starred in the Broadway production of Sleuth. His autobiography, Blind in One Ear: The Avenger Returns, was released in 1988.