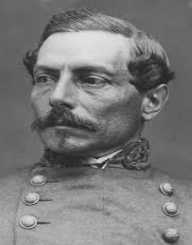 V P.G.T. Beauregard was an American military officer born in 1818. He played a role in the American Civil War, First Battle Of Bull Run, Battle Of Fort Sumter, and Battle Of Shiloh. The graduate of the United States Military Academy (also West Point) served during Mexican-American War. He held the position of an engineer officer. This was from 1846 till 1848.

Also, he is remembered as the first to serve at the position of general during the American Civil War with the Confederate States Army. Later when the years of war, he served as a railroad director. He was nicknamed "Little Creole," "Little Frenchman" and "Bory" among others.

V P.G.T. Beauregard was born on May 28, 1818, in Louisiana, New Orleans, United States. His full names were Pierre Gustave Toutant Beauregard. However, during his later years, only a few times did he use his first name. He always used G.T. Beauregard to sign correspondence. He was the third-born. His father was Jacques Toutant-Beauregard mother was Hélène Judith de Reggio Toutant-Beauregard

The famous military officer trained in the military at the United States Military Academy, USMA (also Army, West Point. Army West Point). Additionally, he studied civil engineering at the academy. He graduated in 1838 after completing his training.  Later, in 1861, he briefly held the position of superintendent at USMA.

In 1838, Beauregard began his military career while serving in the U.S army. He actively played a role in the Mexican-American War were from 1846 till 1848. During the war, he was wounded twice. In 1853 he rose to the rank of captain following his dedication towards serving his country.

In March 1861, he was commissioned to the Confederate Army as the brigadier general. He became the first person ever to hold the position. Sadly, the following year suffered a recurring throat problem. He even received a disability certificate following that problem.

When the war ended, Beauregard decided to go back to Louisiana. He then served in positions like a railroad director. Also, he became the state’s adjutant general. Additionally, he also worked at the Louisiana lottery as the manager.

Beauregard’s later life was marked with bitter quarrels with William Preston Johnston, Jefferson Davis, and Joseph E. Johnston. They were involved in the publishing of Beauregard’s role in the war.

Beauregard authored the 1863 Principles and Maxims of the Art of War. Also, he wrote the 1864 Report on the Defense of Charleston.