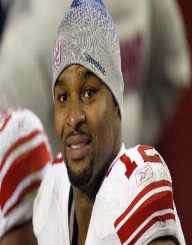 American football player Osi Umenyiora was born in England on the 16 November 1981 to Chinelo Chukwueke and John Umenyiora. He is of Nigerian ancestry, and when he was seven years old, he returned to Nigeria where his father was influential in business and politics.

For his high schooling, Umenyiora moved to Alabama in the United States. Living with his sister who was settled in Alabama, he attended Auburn High School. At Troy University, he studied for a business degree and also became interested in history, politics, and religion.

In an interview with the Guardian newspaper, Umenyiora 14 years old and living in Alabama when he heard of American Football for the first time. He won an athletic scholarship and played college football for the Troy State Trojans where he was soon noticed, finishing 2002 with 15 sacks.

The New York Giants drafted him in the 2nd round of the 2003 NFL, being the 56th overall pick. In 2005, his first year as a started he soon was seen as a premier pass rusher and won All-Pro recognition and participation in the Pro Bowl.  Then in December 2005, he was offered a $41 million six-year contract extension by the Giants with a guaranteed $15 million. Remaining with the New York Giants until 2012 when his contract was not renewed. In March 2012, he signed a two-year contract with $8.55 million with the Atlanta Falcons. Then on the 26 August 2015, after signing a one-day deal with the New York Giants, Umenyiora announced his retirement from professional football.

During his time with the Giants, they won two Super Bowl Championships. In 2005 and 2007 Umenyiora was selected to the Pro Bowl. In 2014, he was inducted into the Troy University Sports Hall of Fame.

In 2015, Umenyiora married Leila Lopes, a former Miss Angola who won the Miss Universe competition in 2011. The couple were married in Anglo and reside in the United States.