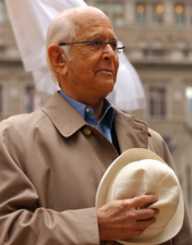 Norman Lear was born on July 27, 1922, in New Haven, Connecticut, USA. His parents were Jeanette and Herman Lear. He also has a sister named Claire. Sadly, Norman’s father went to prison while Norman was still a child. Because of this, Norman was raised by his aunt and uncle, and later his grandparents. He was later reunited with his father after Herman’s prison sentence was completed.

As a teenager, Norman Lear attended Weaver High School. He graduated from this school in 1940. As a young adult, Lear attended Emerson College. However, he never completed his degree program here because he dropped out to serve in the United States Military during World War II.

Norman Lear joined the United States Air Force in 1942, in the heat of World War II. While serving in the Air Force, Lear wor ked as a gunner. He went on over 50 missions during his time in the Army Force. He left the military at the end of World War II.

Around the early-1950’s, Norman Lear began working as a screenwriter. It was at this time that his career in the film and television industry began. One of the first major television shows that he wrote for was The Colgate Comedy Hour from 1950- 1953. His great work on this show opened the door for him and allowed him to write on several other hilarious shows, including The Martha Raye Show, The Tennessee Ernie Ford Show, and The George Gobel Show. He also worked as a producer for The Martha Raye Show from 1954-1956.

Norman Lear continued writing for funny shows all throughout the 1960’s. He had a major recurring writing job on the show The Deputy. Other than this show, he mostly wrote for one episode of a show at a time, as well as writing TV specials. He wrote his first major screenplay for a film, Come Blow Your Horn, in 1963. During this decade, Lear also worked as a producer for several television specials and movies, including The Andy Williams Special, Barnaby, Never Too Late, and Divorce American Style.

Norman Lear returned to writing mostly for television shows in the 1970’s. This was his most prolific decade as a writer. He wrote for many popular sitcoms and other types of television shows, including Sanford Arms, Sanford and Son, Fernwood Tonight, Maude, Good Times, All in the Family, and Mary Hartman, Mary Hartman. There was hardly a popular television show in this decade that Lear didn’t write for. At the same time, Lear was also working as a producer of Maude, Good times, and All in the Family, and more.

Norman Lear slowed slightly in his writing during the 1980’s in regards to the number of television shows that he wrote for. However, this was because he was writing more episodes for a smaller number of shows, some of which that began in the 1970’s. Some of his famous shows from this decade include The Jeffersons, One Day at a Time, and a.k.a. Pablo. During this decade, Lear produced most of the shows that he wrote for, as well as the films P.O.P. and The Princess Bride.

In the 1990’s, Norman Lear wrote exclusively for two television shows: Sunday Dinner and 704 Hause. He also worked as the producer of these shows. He also produced the movies Fried Green Tomatoes and The Thing in Bob’s Garage.

During the 2000’s, Norman Lear didn’t write for any television shows. However, he continued to work as a producer. He only produced films and documentaries, not television shows, during this decade: Maggie Bloom, Independence Day 2001, Declaration of Independence, Pete Seeger: The Power of Song, and El Superstar: The UNlikely Rise of Juan Frances.

Norman Lear returned to writing for television in 2017. He was credited as the original creator of One Day at a Time, which first aired decades earlier. He was also the producer of this show. During this decade he also producer the mini-series America Divided. Lear is also scheduled to produce the film Guess Who Died in the near future.

Over the course of his career, Norman Lear has written several books, which are mostly memoirs. Some of his most famous books are listed below. (He has also written many forwards and introductions to several books.)

During Norman Lear’s career, he has won two dozen awards and has been nominated for over a dozen others. Some of his most impressive awards are listed below.

For his services in the United States Air Force during World War II, Norman Lear was awarded the Air Medal (with four oak leaf clusters).