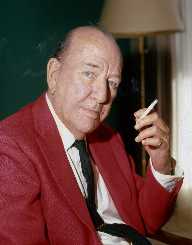 Noel Coward was born on December 16, 1899, in the suburb of Middlesex in London. He studied at the Chapel Royal Choir School. His father, Arthur, sold pianos for a living. He didn’t care about his work, so the family usually had little money.

Noel Coward was interested in performing from a young age. He started appearing in amateur concerts when he was seven years old. His mother, Violet, was quite ambitious and decided to send him to a dance academy. He landed his first professional gig in the children’s play The Goldfish in 1911. After this, he continued performing in different children’s plays. His most notable role at the time was playing Lost Boy Slightly in Peter Pan.

Coward continued performing during World War I. Around this time, he also started writing plays together with some associates. His first solo play was called The Rat Trap. It was finished in 1918, and it explored serious topics. In 1920, he created the comedy I’ll Leave It To You. This play received decent reviews from The Observer and The Times. After that, he wrote a short satire called The Better Half.

Noel Coward traveled to the United States in 1921 hoping to find producers interested in his work. He did not accomplish that. Still, he became very inspired by the Broadway plays he visited. In 1923, his play The Young Idea opened in London. It received positive feedback and quite a lot of fans.

Coward’s first tremendous success came the following year with the play The Vortex. The story was about a wealthy nymphomaniac woman and her drug-addicted son. It attracted large audiences and great reviews. It was also slightly criticized for the shocking portrayal of the elite members of society. The play thrived in both Britain and America.

The Vortex, the demand for Coward’s plays significantly increased. He started creating enormous amounts of work. He wrote the comedies Fallen Angels, Hay Fever, This Was a Man and many others. He wrote dramas such as Easy Virtue and The Marquise. He also created romances, revues, operettas, and historical plays.

Noel Coward was earning plenty of money even during the Great Depression. He collaborated with prominent actors and actresses like Ivor Novello, Alfred Lunt, and Judy Campbell. He also sang and acted in many of his plays himself.

Coward offered to help in World War II. For a while, he ran the British propaganda office in Paris. He also acted and sang for soldiers stationed in different locations to cheer them up. He co-wrote the war film In Which We Serve, winning an honorary Academy Award.

Noel Coward's plays after the war were somewhat successful, but not as much as his previous hits. He explored different genres, publishing comedies, satires, romances, dramas, and revues. In the 1950s and 1960s, he starred in several films such as Around the World in 80 Days and Italian Job. In the 1970s, many of his early plays became popular again.

Noel Coward came from a relatively low-income family, but he was introduced to high society at a young age. He was fascinated by it, and he led a very extravagant life. Most of his plays depicted characters from elite circles.

Coward was homosexual, although he never publicly announced that. He was in relationships with some of his co-workers. He also maintained friendships with many women throughout his life.

Noel Coward started having problems with his arteries in the late 1960s. He also began suffering memory loss. He died of heart failure on March 26, 1973, in Jamaica.

In 1969, Coward was knighted by Queen Elizabeth II for his outstanding achievements. He also won a Tony lifetime award. A theater in London was renamed after him in 2006. Exhibitions in his name were hosted in London, San Francisco, and Beverly Hills. Sculptures of him have been erected in England, New York, and Jamaica.