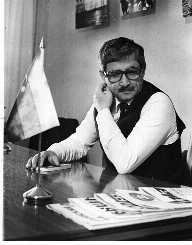 JafarJabbarly known as the Father of Screenwriting in Azerbaijan, JafarJabbarly was a multi-talented personality. He was a poet, dramatist, director, and a screenwriter. In his short lifetime, he made significant contributions to Azerbaijan’s theatre and wrote over twenty plays, some of which have been made into successful movies.

Jabbarly’s work draws attention not only because of great storytelling but also because he focused on burning issues such as the oppression of women during his period.

JafarJabbarly was one of four children of his parents. He was born on March 20, 1899, in Xizi. At only three years of age, he lost his father, and the kids were brought up by his mother. This influence shows in his works where women stand up for themselves and their children.

JafarJabbarly graduated high school in 1915 and then attended the Baku Polytechnique where he learned about electromechanics. He went to the Azerbaijan State University to pursue medicine but did not display any interest in the subject.

JafarJabbarly eventually dropped out to attend drama lectures. Right from an early age, Jabbarly showed an inclination towards the Arts and theatre.

After dropping out of college, he tried his hand at screenwriting. He was quite successful and became the first screenwriter of Azerbaijan. Jafar Jabbarly produced many excellent works like Baku War, Bride of Fire, Almaz, Sevil, and Shah Hasreddin. Jafar Jabbarly was a feminist, and most of his plays have a women-centric theme. He shows them as standing up to the oppression of the society and winning at the end.

In his career, cut short by his untimely death, JafarJabbarly wrote more than 20 plays. In 1929, his work Sevilwas made into a successful film. Almas was shot in 1934. However, he passed away. His friends finished the movie after his death. Both these works are considered his most significant achievements.

Although the theatre was the first love for JafarJabbarly, he dabbled in translation both early and late in his career. As a teenager, he wrote poems. In 1920, he was appointed as a translator in the Kommunist. Jafar Jabbarly translated several European plays and gave the Azerbaijani people a taste of the flourishing European literature. His most well-known translations include that of Hamlet, and Othello by William Shakespeare, and Marriage of Figaro by Pierre Beaumarchais.

Jafar Jabbarly died on December 31, 1934, at the age of 35. The cause of his death was heart failure. His untimely demise shocked the cultural community in Azerbaijan and worldwide. He was working on filming Almas at the time.

The Azerbaijan Film Studio erected a monument as a tribute to JafarJabbarly in 1980. He has also been the subject of several documentaries, such as the Unfading Spring, where he is portrayed as a playwright of outstanding caliber. Even more than 72 years after his death, his plays are still dramatized, and his writings read with great pleasure.

Not many details of JafarJabbarly’s own life are known. He was married to Sona Khanim.