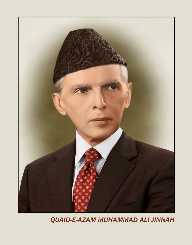 Muhammad Al I Jinnah born Mahomedali Jinnahbhai was a Pakistani lawyer and founder of Pakistan. Born on December 25, 1876, he was the first Governor-General of Pakistan serving from 1947 until his death in 1948. Before rising to that position, he was the leader of the All-India Muslim League from 1913 to August 14, 1947, when Pakistan gained independence. Jinnah started a career as a barrister at the Bombay High Court and later joined politics as a member of the Indian National Congress. He later resigned from Congress.

In 1940, Muhammad Al I Jinnah conceived the idea of an independent Muslim state in the Indian subcontinent. Jinnah led the passage of the Lahore Resolution by the Muslim League in demand for a separate state. Since the Indian National Congress and All-India Muslim League could not reach a consensus for a united single subcontinent state, both parties agreed to an independent Hindu India, and a Muslim-majority Pakistan state, hence Pakistan gaining independence on August 14, 1947, from the United Kingdom.

Muhammad Al I Jinnah then became the first Governor-General of Pakistan and died about a year later. Jinnah is referred to as Quaid-i-Azam (Great Leader) and Baba-i-Qaum (Father of the Nation) in Pakistan. His birthday December 25 is a national holiday in the country. He has been named after several streets and monuments in Pakistan.

Muhammad Al Jinnah was born Mahomedali Jinnahbhai on December 25, 1876, in Wazir Mansion a suburb of Karachi, Sindh in Pakistan. He was the second child of seven by Mithibai and Jannahbhai Poonja. His six siblings included three sisters and three brothers including Fatima Jinnah. He was born into a family with Gujarati Ismaili background. Born into a wealthy family, his father was a prosperous merchant.

Growing up, Muhammad Al I Jinnah spent some time with his aunt in Bombay and where he attended Gokal Das Tej Primary School and continued at Cathedral and John Connon School. Back in Karachi, he received education at Sindh-Madrasa-tul-Islam and continued at the Christian Missionary Society High School. He gained admission at Bombay University while in high school.

Muhammad Al Jinnah father’s business associate, Sir Frederick Leigh Croft offered him an apprenticeship with his company Graham's Shipping and Trading Company in London in 1892. He accepted the offer to his mother and young wife’s approval. In London, Jinnah decided to drop his business apprenticeship to study law to the dissatisfaction of his father.

Muhammad Al I Jinnah entered the Lincoln Inn and understudied an established barrister while reading several law books. This was when he also shortened his name from Mahomedali Jinnahbhai to Muhammad Al Jinnah. Just like many other future Indian independence leaders, Jinnah as also influenced by 19th century British liberalism. He also picked the Western style of dressing.

At the age of 19 in 1895, Muhammad Al I Jinnah was called to the bar in England becoming the youngest Indian to achieve that feat. In 1896, he became the only Muslim barrister practising in Bombay. He worked in the chambers of the acting Advocate General of Bombay, John Molesworth MacPherson.In1900, he declined the post of Bombay presidency magistrate due to low salary as he rejected the 1,500 rupee per month salary. He gained fame during the Causes Case in 1907.

Muhammad Al Jinnah became involved in Indian politic by attending the twentieth annual meeting of the Indian National Congress in December 1904. As a moderate member of the Congress, he was in favour of Hindu-Muslim unity and a call for self-government. Also as a moderate Muslim, he was against the formation of the All-India Muslim League by hardened Muslims led by Aga Khan. He was also against a separate electorate for Muslims. In 1909, he was elected to the Imperial Legislative Council representing Bombay Muslims. He also became a member of the All-Muslim League in 1913 but did not relinquish his membership of the Indian National Congress. He joined Congress members like Gopal Krishna Gokhale and PherozeshahMerwanjeeMehtain several negotiations with the British in London. In 1916, Jinnah became the President of the Muslim League. It was during this period that the Lucknow Pact was signed between the Congress and Muslim League. The pact set a quota for Hindus and Muslims in various provinces. He held several other positions of interest in the fight for a self-governing India. In October 1934, he was elected in absentia to as Bombay Muslims represented to the Central Legislative Assembly. Jinnah was at the time in London, aging and suffering from a lung ailment.

As the struggle for an independent unitary India state progressed, another faction including Sir Muhammed Iqbal, seeking for a separate Muslim country “Pakistan” also emerged. Iqbal would later be an inspiration for Muhammad Al I Jinnah. In February 1940, Jinnah representing the Muslim league demanded a partitioned British India as opposed to the federation. This led to the Lahore Resolution that welcomed a Two-Nation Theory in 1940.

All this while, Mahatma Gandhi was on the other side that is the Indian National Congress fighting for independence. Some leaders of the Congress saw the idea of partition was just impossible. During the World War II, the British government sought for the support of Indians to no avail leading to the arrest of leading figures of Congress including Gandhi who was later put into house arrest. All the leaders were later released in 1945.

After backs and forth Muhammad Al I Jinnah stood firm with his demand stating,"Pakistan is a matter of life or death for us" during a conference of the Muslim League in Ahmedabad, as he feared Muslims would be at a disadvantage after an independent India and all powers delegated to the Congress.

Finally, on June 2, 1947, the Viceroy of India Mountbatten declared that the British would return power to the two dominions on August 14, 1947. Some weeks later Punjab and Bengal voted for a partition.

After Pakistan gained independence on August 14, 1847, Muhammad Al Jinnah led celebration through Karachi. Jinnah was subsequently announced as the Governor-General of Pakistan. The partition, however, led to ethnic cleansing and murder of those who found themselves behind the wrong line. It is estimated that about 500,000 to one million women and children perished in Punjab. Also, about 14,500,000 had to relocate to either India or Pakistan after the partition. Jinnah tried to do his best to secure Pakistani immigrants. Assets were also shared among the two nations

Muhammad Al Jinnah's first wife was his cousin Eminai Jinnah, two years his junior in 1892. Emibai was 14 years during the marriage and died while Jinnah was away in England.  He later married Rattanbai Petit, who was 24 years his junior in 1918. That had one daughter, Dina in 1919. Rattanbai died in 1929. Jinnah suffered from tuberculosis in the 1930s but the ailment remained a secret from the public. He health continued to deteriorate despite continues treatment. He died on September 11, 1948, at age 71 in his Karachi home.