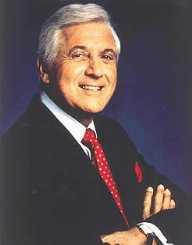 Monte Halparin was born 25th August 1921, to Maurice and Rose Halparin. He was born in Winnipeg, Manitoba, in Canada. His father owned and ran a slaughterhouse.

Hall studied at St. John’s High School and after graduating went to the University of Manitoba. He graduated with a Bachelor of Science in Chemistry.

Hall worked for a radio station in Winnipeg while he was still studying, and after graduation, he went to work for the Canadian Wheat Board.

Hall decided he wanted to work in broadcasting, and in 1946, he moved to Toronto and found himself a job at the radio station CHUM. He was given the stage name of Monty Hall during this period.

For the next ten years, Hall hosted and produced several shows, including Who Am I? which was syndicated and distributed nationally. He also dabbled in television, but the shows only aired for a short time, so Hall decided to stick with radio.

In 1955, he moved to New York City, with the hope of making it in the American broadcasting industry. He continued to return to Toronto several times a month to keep recording Who Am I?

Hall also did the radio analyst work for the New York Rangers in the National Hockey League for the 1959-1960 season.

In 1960 he broke into television when he replaced the host of the game show, Video Village which ran until 1962.

He then moved to California and became the host of a game show called, Let’s Make a Deal. Hall created and produced the show as well, in conjunction with Stefan Hatos. The show aired from 1963 to 1968 on NBC. It was then taken over by the ABC and aired until 1976.

Hall and Hatos created other game shows, but none of them were successful.

CBS relaunched Let’s Make a Deal in 2009. Wayne Brady hosted the show, and Hall received credit as “Creative Consultant” until 2017.

Among his awards and honors, Hall has the following:

1988:   Appointed an Officer of The Order of Canada

Hall married Marilyn Plottel in 1947. The couple had three children, two daughters, and a son. They were still together at the time of Plottel’s death, four months before Hall.

Hall was known for his tireless philanthropic work. He raised almost one billion over the years for various charities.