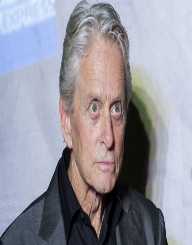 Michael Douglas is the son of legendary actor Kirk Douglas.  However, Michael Douglas has proven himself worthy of being an acting legend of his own.

Michael Douglas was born on September 25, 1944, in New Brunswick, New Jersey.  His father, Kirk Douglas, was a great inspiration and teacher when it came to Michael's education in the world of film.  Sometimes Kirk would take his son to some of his film sets.

Michael Douglas went to school in New York, namely Eaglebrook School and Choate Preparatory School.  He graduated college in 1968 from the University of California in Santa Barbara.  Michael Douglas studied drama at the university but was also a student at the American Place Theatre in New York City.

As well as Michael Douglas was doing as an actor, he also had an interest in directing and producing movies.  Michael Douglas started as an assistant director in some of his father's movies.  The award-winning movie One Flew Over the Cuckoo's Nest was one of his first that he did on his own. The star Jack Nicholson was picked by Douglas for the leading role.  It won five Academy Awards.  Michael Douglas also starred and co-produced The China Syndrome. Michael Douglas found stardom in front of the camera again showing versatility in comedy, drama, and thrillers.  Films such as Romancing the Stone, Fatal Attraction, and Wall Street, made him well known throughout the 1980s.

Michael Douglas earned his best actor Oscar for his portrayal of corporate raider Gordon Gekko.  The 1990s were also a success for Michael Douglas with films such as Basic Instinct, Disclosure, The American President, and A Perfect Murder.  By 2000, Michael Douglas was still starring in roles like Wonder Boys and Traffic.  Michael Douglas continued to be recognized for his performances like as Liberace in Behind the Candelabra.  Three generations of Douglas men starred in the film It All Runs in the Family.

In 2010, Michael Douglas was diagnosed with a throat tumor.  His lifestyle as a heavy smoker contributed to it.  Douglas continues to act.  In 2013 Michael Douglas starred in the comedy Last Vegas.  In 2015 he had a role in the Marvel superhero film Ant-Man.

Michael Douglas was married to his wife Diandra from 1977 to 2000.  Their son Cameron starred in It All Runs in the Family with his father and grandfather.  In 2000, Michael Douglas married fellow actress Catherine Zeta-Jones.

Together they have a son and a daughter.  They were separated for a while after twelve years of marriage, but have since reconciled.

Michael Douglas is a United Nations messenger of peace.  His platform is on the promotion of human rights.

Michael Douglas has won numerous awards for his acting.  From 1976 to 2014, he has earned motion picture recognition from the Screen Actors Guild, the Golden Globes, and the Academy of Motion Pictures.

In 2004 Michael Douglas was awarded the Cecil B. DeMille Award from the Hollywood Foreign Press Association for outstanding contribution to the entertainment field.