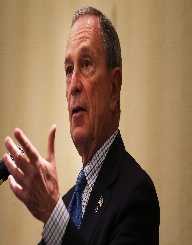 Born on February 14th, 1942, Michael Bloomberg is a former mayor of the New York City. He was born in Boston, Massachusetts. He pursued an engineering course at Johns Hopkins University after which he graduated in 1964. In addition to this, he went for his master's degree at Harvard Business School in 1966. His businesses changed the way of distributing financial information, and this also made him a billionaire. In 2002, he led New York City as the mayor.

Michael Bloomberg was born in a Jewish family. William Henry Bloomberg was his father and that he died in 1963. He was a bookkeeper. His mother was Charlotte Bloomberg. She also passed away in 2011.

Bloomberg was a graduate of the Johns Hopkins University. He graduated as an electrical engineer in 1964. He also undertook Masters of Business Administration in Harvard school of business.

After graduating from Harvard Business School, he worked with Salomon Brothers. This was a Wall Street investment bank. Michael Bloomberg was a hardworking individual, and this gave him the opportunity to climb up the ladders of success with the investment bank.

In 1973, he had gone to greater heights, and he managed to become one of the official partners of the bank. Unfortunately, in 1981, Phibro Corporation bought the Wall Street bank, and Bloomberg went home. The good news for him was that he was offered $10 million as the severance package.

In 1982, he went on to form his firm and became the CEO. His company dealt with offering financial services. Things turned around when they got Merrill Lynch; a branch to Bank of America, as their customer.

Over the years, Bloomberg’s company was successful, and in 1987 he changed its name to Bloomberg L.P. The company had over 100 branches globally. Bloomberg had gained the recognition that would make him one of the world’s wealthiest men. As a result, he decided to switch careers and left his CEO role in his company to venture into politics.

With the kind of recognition that Michael Bloomberg had, this gave him the upper hand in the mayor elections held in 2002. He won this election becoming the 108th Mayor of the New York City. His significant achievements while working as a mayor was establishing the 311 telephone line. With the help of this line, callers had the opportunity of helping the city eradicate crimes and other possible problems. His success as a mayor during his first term made him get re-elected in 2005.

Out of the ordinary, Bloomberg managed to bend the rules and create legislation that would favor him in the running for mayor office for the third time. He claimed that the economic issues facing the nation and with his financial skills, he was best fitted to remain in position. After spending over 90 million dollars in his campaign, he won the mayor’s seat yet again. This time he was running as an independent.

After spending many years in office, in 2014, Michael Bloomberg retired from politics and went ahead to carry on with his philanthropic projects. Later on, he also went back to his position as the CEO of Bloomberg L.P.

In 2016 presidential elections, Michael Bloomberg had in mind to run for the highest office in government. This was an idea that came to mind after he saw the candidates as least favorite of all time. However, later that year in March, he changed his mind about the entire deal.

In 1975, Michael Bloomberg tied the knot with Susan Elizabeth Barbara Brown who was a British national. The two had two children, Emma and Georgina. In 1993, they divorced. Since then Bloomberg has been associated to be in a loving relationship with Diana Taylor who is a banking superintendent.