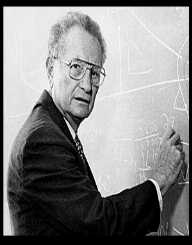 Economist Merton Howard Miller was born on the 16 May 1923 in Boston, Massachusetts. His parents were Joel Miller, an attorney, and Sylvia Starr.

Merton Miller did his high school at the Boston Latin School. He obtained his undergraduate degree at Harvard University (1940-1944). In 1952 he was awarded a doctorate in economics from John Hopkins University.

In 1944, during World War II, Merton Miller worked for the US Government in the Treasury Department as well as at the Federal Reserve. Merton Miller spent time as a visiting lecturer at the London School of Economics for the 1952-1953 academic year. Upon his return home, he took up a position at Carnegie-Mellon University in Pennsylvania. A fellow academic was Franco Modigliani. He collaborated with Modigliani, and in 1958, the Miller-Modigliani theory was published.This theory states that the value of a company is determined by its investment decisions, not by financing decisions.

In 1961 Merton Miller joined the Graduate School of Business at the University of Chicago and remained there for the rest of his academic career, retiring in 1993.

Merton Miller authored eight books including The Theory of Finance (1972), Macroeconomics: A Neoclassical Introduction (1980) and Financial Innovations and Market Volatility (1991).

Merton Miller was elected a fellow of the Econometric Society in 1975 and 1976 became the president of the American Finance Association.

In 1990 Merton Miller shared the 1990 Nobel Prize with Harry Markowitz and William F. Sharpe for their role in financial economics. Miller’s contribution was the Modigliani-Miller theorem, developed with Franco Modigliani. (Modigliani was awarded the Nobel Prize in Economics in 1985).

Merton Miller was married twice, and he had three children.

Merton H. Miller died on the 3 June 2000 in Chicago. He had been in ill health due to lymphoma.