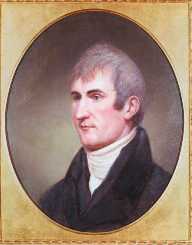 Meriwether Lewis was a politician, soldier and an American Explorer that is very renown for his role as the leader of the Lewis and Clark Expedition. He is known for his expedition to explore the territory of the Lousiana Purchase which happened to be the territory that was acquired from France by United State. He was the intention of establishing trade with the natives to gain sovereignty over the natives there and lay claim of Oregon Country for the US. Apart from these, his pursuit was merely fuelled by the United State’s interest in Pacific Northwest before the European countries. More valued information as regards to the region geography was collated for scientific purpose.

After a successful expedition, he got himself appointed as the Governor of Upper Louisiana. To honor him and Clark, the Lewis and Clark Exposition dollars made of gold were minted as well as stamps. Several places like Lewis County, Washington and Lewis County, Tennesse were named after him as well as several US Navy Vessels and academic institutions.

On the 18th day of August 1774, Meriwether Lewis was born in Albermarle County, Virginia in the Lewis Family to Lt William Lewis and Lucy Lewis. He was the second born but the first son of the family. His father died in 1779 of pneumonia while serving as a lieutenant in the Continental Army. His parents were formally cousins before their marriage. After six months of her dad’s death, her mother remarried a retired army officer. The family moved out in 1780. As at 12 years of age, Meriwether Lewis had no formal education. His only interest as at then was to enhance his skill as a hunter. Often time, he ventures out for hunting with his dog at midnight.

Meriwether Lewis was very curious about natural history and an outdoorsman. He knows a different collection of herbs of high medicinal qualities being the fact that his mother was a herbalist. He was sent to Virginia at age 13 where he learned under Mathew Maury, Parsons William Douglas, Nicholas Lewis and Dr. Charles Everitt. In 1790, he was taught by James Waddell. He graduated from Liberty Hall (Washington and Lee University) and managed and developed Locust Hill estate after his graduation. He observed and maintained the flora and fauna before his mother came back to the Locust Hill with his half-siblings after John Mark’s death.

As of 1974, the Virginia Militia Army sent him in a detachment to control some whiskey rebels. Later in 1795, he got the rank of an Ensign in the US Army and served in the frontier Army for six years before becoming a captain in 1800. William Clark was his commanding officer then. In 1801, he was appointed as the President Jefferson’s secretary. He was later chosen by the president to lead an expedition of the Pacific Northwest lands. He, however, got the consent of the Congress to carry out the first US initiated transcontinental military exploration. He first learned navigation from Jefferson before he went to Philadelphia to learn about Cartography and Astronomy. He chose Clark as his companion to share command with him. The main purpose was to set up a commercial relationship with the natives as well as to establish sovereignty before the Europeans. However, they discovered that Native Americans are linked to the global markets through the trade with the Europeans.

However, in 1805, they got to Oregon Country and the Pacific Ocean. In 1806, he completed his mission and helped strengthen the American Concept of Manifest Destiny, i.e., the destiny of the United States to reach across from Atlantic to Pacific. He got rewarded with 1, 600 acres of land at the end. He was also made the governor of the Upper Louisiana Territory in 1807. However, his indulgence in the consumption of alcohol and the delay to take the responsibility of a governor strained his relationship with the president. He, however, went to St Louis in 1808 after a full year of appointment. He was known to have gone to Washington D.C. to resolve issues related to denied payment of drafts drawn by the War Department in his capacity as the governor of the Upper Louisiana Territory.

His contribution to the science as well as the exploration in the western US is immensely incalculable. He was also considered as a special person that is worthy of study by the world explorers. The Louisiana Purchase also doubled the Size of United States, and this is his work alongside Clark, his partner.

In the predawn hours on the the11th day of October 1809, Meriwether Lewis was found dead at the Grinder’s Inn in Tennessee with gunshot wounds on him. He was buried near the Grinder’s Stand, but the mystery of his death is still unknown. A monument was erected over his grave by the State of Tennessee in 1848.