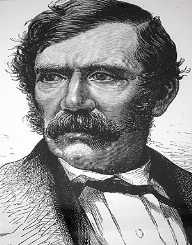 With this aim, he also tried to find the source of the Nile but later abandoned the mission after facing several obstacles. However, he discovered several water bodies including Mosi-o-Tunya "the smoke that thunders," which he named the Victoria Falls after Queen Victoria.

David Livingston was born on March 19, 1913, in Blantyre, Scotland as the second child of Neil Livingston and Agnes nee Hunter. He had six other siblings. His father was a Sunday school teacher and a teetotaller.

At the age of ten Livingston and his brother, John worked in the cotton mill of Henry Monteith& Co in Blantyre Works, working on twelve-hour day.

David Livingston received early education at Blantyre village school. Livingston gained a keen interest in the study of science while growing up and despite his father’s wish that he studied theology, he shifted to science studies. In 1834, he read an appeal by missionary Karl Gutzlaff for medical missionaries for China, making him persuade his father to allow him to study medicine.

David Livingston was able to save enough money to enter Anderson’s College, Glasgow (now University of Strathclyde) in 1836. He also studied Greek and theology at the University of Glasgow. He later joined the London Missionary Society where he was also subjected to missionary training.

He later enrolled at the Charing Cross Hospital Medical School, where he studied midwifery, medical practice, and botany from 1838 to 1840. On January 5, 1857, he was licenced by the Faculty of Physicians and Surgeons of Glasgow (now Royal College).

Trained as a missionary, David Livingston was initially bound for China, but the 1839 First Opium War prevented the mission. Upon meeting Robert Moffat who a missionary outpost in South Africa, Livingston became interested in the prospects in Africa and his high will to abolish slave trade through legitimate trade and to spread Christianity and decided to come to Southern Africa.

David Livingston arrived in Cape Town, South Africa in March 1841. He started his missionary works at Kuruman on the Cape frontier, spreading the gospel through natives to have more converts. In 1842, he had made it to Kalahari Country, which was the farthest any European had gone. Livingston was able to learn the cultures and local languages to make his work more accessible.

In 1844, a lion attacked him while on a journey to Mabotsain Botswana to establish a mission and was severely injured in the left arm. He continued his exploration in Kolobeng, where he was able to convert only Chief Sechele to Christianity in 1849. Sechele later backtracked.

David Livingston travelled extensively through the north of Kolobeng between 1849 and 1851 as he tried to navigate the region to map entry points through which many other missionaries enter the area. He charted the entire course of river Zambezi and became one of the first European to make a transcontinental journey across Africa from the southern to central Africa from 1854 to 1856. Livingston later discovered his real spiritual calling, which is an exploration, to identify routes for commercial trades to prevent slave trade, returned to Britain to resign from the London Missionary Society in 1857.

David Livingston later gained the support of the people of Britain due to his initial discoveries, and in May 1857, he was appointed as Her Majesty's Consul for further exploration through Mozambique to the areas west of it. The British government funded his return to Africa, leading the Second Zambesi Expedition to explore the natural resources of southeastern Africa. This lasted from 1858 to 1864, during which other members of the expedition characterised him as self-righteous, low tolerance level, moody and incapable of leading a large-scale expedition.

Despite becoming the first expedition to reach Lake Malawi, it was termed as a failure, and he returned to England in 1864. David Livingston returned to Africa in 1866 to Zanzibar aimed to explore the source of the Nile. During the expedition which was from the mouth of Ruvuma river with many assistants, most of them later deserted him and returned to Zanzibar claiming he has been killed.

Despite declining health and most of his supplies and medicine stolen, he continued the exploration, becoming the first European to see Lake Bangweulu in 1867. He, however, aborted the exploration due to ill health and lack of supplies. Livingston was a witness to the massacre of over 400 Africans by slavers on the bank of Lualaba River on July 15, 1871, during a visit to Nyangwe.

Through his missionary works, David Livingston made several geographical discoveries including the Lake Ngami, Lake Victoria (originally Mosi-o-Tunya "the smoke that thunders"), Lake Bangweulu, and Lake Malawi. He also gave detailed contributions of Lake Mweru, Lake Tanganyika and several others mostly in the upper Zambezi. Livingston received a gold medal from the Royal Geographical Society of London for the expedition of the Lake Ngami in 1849. He later became a Fellow of the society.

David Livingston married Mary Moffatin 1845,w ith whom he had six children. His children include Robert, Agnes, Thomas, Elizabeth, William Oswel, and Anna Mary. Due to the exploration activities, Livingston did not have enough time for his family and the children grew up without him.

His wife died of Malaria in 1862 as she tried to follow him up in Africa. David Livingston died of malaria and internal bleeding in 1873 at the age of 60 in Chitambo's village at Ilalanear Lake Bangweulu, North Rhodesia in the present day Zambia.

After his death, his attendants Chuma and Susi removed his heart and buried it under a Baobab tree near where he died, now known as the Livingston Memorial. H is remains were transported t to Britain for burial at Westminster Abbey.