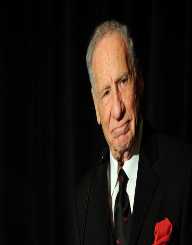 Mel Brooks was born on June 28, 1926, in Brooklyn, New York. His father was from Germany, but his mother-form Poland. Brooks hat three older brothers. When he was only two years old, Brooks’ father died of kidney disease.

As a child, Brooks was small and often got sick. He was often teased and bullied by his classmates. Brooks took up playing drums and was taught by Buddy Rich, who was also living in Williamsburg, where Brooks’ family lived. He graduated from Eastern District High School and majored in Brooklyn College for one year when he was enrolled in the army. He served as United States corporal in Engineer Combat Battalion defusing mines during the World War II.

After returning from the army, Brooks started to work as an entertainer in Catskills resorts. In 1949, he partnered with comedian Sid Caesar and wrote The Admiral Broadway Revue. In 1950, the pair wrote Your Show of Shows.

Brooks and Buck Henry collaborated on the TV project Get Smart. The series parodying the spy world aired in 1965. The show was a big success. In 1964, Brooks won the Academy Award for his work on animated short The Critic.
In 1968, Brooks made his film debut by writing and directing comedy The Producers. The movie was not very successful at the box offices but earned Brooks an Oscar for Best Screenplay.

Brooks had already made his name in Hollywood when in 1970 he directed the film 12 chairs. The same year, he also worked on the animated adaptation of musical Shinbone Alley. In 1974, Brooks co-wrote a parody of westerns Blazing Saddles, which was critically acclaimed. The motion picture earned almost $120 million domestically.

1974 was one of the most successful years in Brooks’ career. Soon after the release of Blazing Saddles, he wrote the now-classic movie Young Frankenstein. He continued his work as a writer and director for the next two decades. Brooks’ most famous works include High Anxiety (1977), History of the World (1981), Life Stinks (1991) and many others. Besides his work as a writer and director, Brooks also opened his own production company Brooksfilms. The company produced films like The Elephant Man, To Be or Not to Be and The Fly.

Brooks has won the Oscar, Emmy, Grammy and Tony awards, which is a rare achievement in Hollywood. He received two Grammy awards for the Broadway version of The Producers and another one for the comedy album The 2000 Year Old Man in The Year 2000. The Producers Broadway musical version won a record-breaking 12 Tony Awards and ran for six years. Three of his films are also on America’s Film Institute list of funniest American films.

Brooks’ first marriage was to Florence Baum in 1953. The couple had three kids, but they divorced ten years later. His second marriage was to actress Anne Bancroft in 1964. The couple remained together until her death in 2005. They had one child, a son Max. Brooks has stated, that Anne was the guiding force behind creating The Producers and Young Frankenstein. His brothers Lenny’s son, Todd Kaminsky in New York State Senator.

Brooks’ parents were Jewish, and he is also Jewish. Still, Brooks admitted that he is secular about his religion.