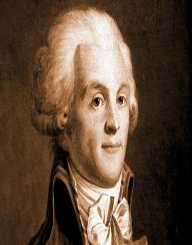 As a child, Maximilien De Robespierre attended the college of Arras (which was more of a primary school than a modern day college). He continued to go to this school until he was offered a scholarship to attend the Lycee Louis-le-Grand school in Paris. He then stayed at this school until he was 23. When he graduated from the school, he was officially trained to be a lawyer.

After completing his studies, Maximilien De Robespierre went on to start his career in the law. He first worked as a judge in the Diocese of Arras in 1782. He did not stay at this position for long, as he did not like having to sentence people to death (which was a much more common punishment at the time than it is now).

After taking a short break from working in law, Maximilien De Robespierre went on to work in politics instead. He was first elected as a fifth deputy of the Third Estate of Artois. He worked to make the country more democratic, and less of a monarchy-based system. This made him popular with the general public, but not amongst the monarchy itself. This did not deter De Robespierre from continuing to work in politics.

In 1789, he became the president of the Jacobian political party. While in this post, he helped to write the Declaration of Rights of Man and Citizen, which would later go on to be used as a basis for the French constitution.

In the early 1790’s, Maximilien De Robespierre began to work towards overthrowing the French monarchy and making the country a democratic nation. Around this time, there was an uprising in France, and in 1792, the French monarchy was in ruins. Soon afterward, De Robespierre was elected as one of the leaders of the Paris Delegation. Later the same year, France was officially a republic instead of a monarchy. In 1793, King Louis XVI was executed.

After King Louis XVI’s execution, Maximilien De Robespierre gained more power than he ever could have imagined having before. However, France was still facing a troubling time after the uprising. De Robespierre felt as though the country needed to be stabilized. He then worked on establishing the Revolutionary Tribunal, which was run by the Jacobian party. This tribunal went on to replace the Committee of General Defence with another group, The Committee of Public Safety, which De Robespierre later gave himself a job at.

The French Revolution - The Reign of Terror

Maximilien De Robespierre’s power grew even more as he worked in the Committee of Public Safety. In this committee, he helped to launch a new French Revolution, which would later be nicknamed The Reign of Terror. In 1793, other countries were beginning to threaten France, so De Robespierre decided that it was time to take action, even though the actions he took were rash and dangerous for both himself and the country. He was considered to be one of the leaders of one of this new French Revolution. While he leads the revolution, he ordered thousands of executions of people who he thought were working against the revolution. This made common people and nobles alike hate him, which made his life all the more dangerous. The violence that Maximilien De Robespierre both permitted and ordered only created more violence.

One group was more determined than the others to stop this revolution and crush  De Robespierre’s power and influence over France and its people. The Thermidorian Reaction was determined to ruin both the member of the Jacobian party and the Committee of Public Safety (both of which De Robespierre was a member of at this time). The Thermidorian Reaction later arrested Maximilien De Robespierre for leading the revolution. Hundreds of thousands of people are estimated to have died during the Reign of Terror.

Maximilien De Robespierre was executed, by way of the guillotine, on July 27, 1794. He did not have a trial before his death. He died because he was suspected to be an enemy of the revolution. Many other powerful politicians of the time were also executed in this fashion. After these executions, the revolution began to calm down.