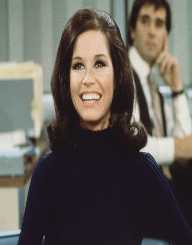 Mary Tyler Moore was born on December 29; 1936. She was a well-known actress because of her role in the sitcom, The Mary Tyler Moore Show. Tyler began her career in commercials and featured in films and series. She has won some very coveted awards in her career. Tyler also showed interest in theatres and dance where she expounded on her talent. Tyler died on January 25, 2017, at the age of 80.

Mary Tyler Moore was born on December 29, 1936, in Brooklyn, New York.  They lived in Flushing, Queens and she was the eldest amongst her two siblings, John and Elizabeth.  Elizabeth died at age 21 due to an overdose and John died due to kidney cancer at age 47.  Her father, George Tyler Moore was a clerk and her mother, Marjorie Hackett.  Her paternal grandfather, Lieutenant Colonel Lewis Tilghman Moore, owned the house, which they lived in exactly in Ocean Parkway. The house is nowadays known as Stonewall Jackson's Headquarters Museum located in Virginia.  When she turned eight years old, Moore and her family moved to Los Angeles after her uncle suggested to her parents.

At the age of 17, Moore decided to do dancing.  She later appeared in 39 Hotpoint appliances commercials in five days as a tiny dancing elf. She became pregnant and could not conceal it thus her contract was ended with Hotpoint.  She anonymously modeled in record albums and auditioned in Danny Thomas Television Show as his daughter but was turned down because her nose was smaller. Her first regular television role was in Richard Diamond, Private Detective where she appeared as a receptionist but only her legs were shown on camera.  Her guest appearances were in John Cassavetes's NBC detective series and Bachelor Father.  Her series features included the 1960 William Bendix-Doug McClure NBC western series, The Tab Hunter Show, and Overland Trail.  In1961, it was her turning point when she appeared in many big television and movie scenes like Bourbon Street Beat, Hawaiian Eye, and Steve Canyon.

In 1978, she was in the CBS, How to Survive the '70s and Maybe Even Bump Into Happiness. Moore, later on, tried to unsuccessfully star in musical-variety genre in CBS variety series in a row, Mary and The Mary Tyler Moore Hour.  in 1988, Mary featured in Annie McGuire, which was short lived.  In 1995 she showed dissatisfaction with New York News, which she starred in and it was canceled.

Moore lived with type 1 diabetes over her years. She had a miscarriage, which made her be diagnosed of it in 1969. In 2011, she had a surgical removal of meningioma a sort of brain tumor. In 2014, it was reported that she had kidney failures. She also had pneumonia, which had led to her death.

In 1969, Moore and Grant Tinker, her husband founded MTM Enterprises, Inc which produced several television shows and films and had a record label, MTM Records. Moore received seven Emmy awards and in 1980, she received a special l Tony Award in 1980 and 1985. She has also received many major nominations including Academy Award and Tony Award. In 1986, Moore was put in Television Hall of Fame while in 1987 she was awarded the Lifetime Achievement Award for the best Comedy from the American Comedy Award.

In 1992 she was recognized in the star of Hollywood Walk of Fame and in 2002 a statue, by sculptor Gwendolyn Gillen, was erected in her presence as a recognition by when cable network TV Land and the City of Minneapolis. In 2011, she was awarded the Screen Actors Guild's lifetime achievement award and in 2012, she and Bernadette Peters were honored with Ride of Fame.  This was not the end when they were both dedicated a double-decker in conjunction with their co-founded charity.

Moore was the International Chairman of JDRF (formerly the Juvenile Diabetes Research Foundation) as she raised fund for diabetes mellitus type 1. As an animal activist, she supported charities like the ASPCA and Farm Sanctuary.  In 1995, Moore donated funds for the use of building a centre for Civil Studies in Shepherd University in memory of her father who was a civil war enthusiast. She also engaged in positive politics during Jimmy Carter and McCain’s presidential bids.

In 1955 Moore married, Richard Carleton Meeker and were blessed with a son Richard Jr after a year that later died in 1980 due to an accidental headshot from a shotgun.  They divorced in 1961. In 1962, Moore was married to Grant Tinker who was a CBS executive who went to NBC and became the chairman.  In 1983, Moore married Robert Levin.

Moore died in on January 25, 2017, at Greenwich Hospital, Connecticut.