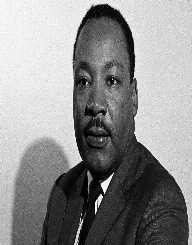 Martin Luther King Jr. was born on the 15 January 1929 in Atlanta, Georgia in the United States. His parents were Martin Luther King Sr and Alberta Williams King. His siblings were Christine King Farris and Alfred Daniel (A.D.) Williams King. King was raised in the Sweet Auburn area of Atlanta where his father was a pastor and his mother a schoolteacher.

Martin Luther King Jr. was a pupil at segregated public schools until age fifteen when he was enrolled at Morehouse College. He studied law and medicine. Both his father and grandfather had attended Morehouse College. Dr. Benjamin Mays who was an advocate for racial equality had a big impact on King. Once he had graduated from Morehouse College (1948) King began studying theology at the Crozer Theological Seminary in Pennsylvania, obtaining a BA in divinity. Once he had his theology degree, King began a graduate programme at Boston University and was awarded a doctorate in systematic theology (1953-1955).

Martin Luther King Jr. met Coretta Scott, who was studying music at the New England Conservatory of Music and in 1953 the couple married. They moved to Montgomery, Alabama and had four children together: Yolanda Denise (1955-2007), Martin Luther King III (b.1957), Dexter Scott (b.1961) and Bernice Albertine (b.1963).

The first year that King was living in Alabama, Montgomery the Montgomery Bus Boycott occurred. In early December 1955, Rosa Parks refused to give up her seat on a Montgomery bus to a white passenger and was subsequently arrested. A bus boycott then began which lasted for 381 days which caused hardship for downtown business owners. Martin Luther King Jr. was chosen as the protest leader and official spokesman to handle the negotiations.

The US Supreme Court ruled in November 1956 that segregated seating on public buses was unconstitutional. Martin Luther King Jr. by that time had become a national figure. He believed in a non-violent approach, and his philosophy was influenced by Mahatma Gandhi (b.1869-d.1948) and Bayard Rustin (b.1912-d.1987).

During the early 1960s, Martin Luther King Jr. moved back to his hometown of Atlanta, and there he worked with his father as a pastor at the Ebenezer Baptist Church. In 1963 the Birmingham protest took place, and King was arrested. He wrote the famous civil rights manifesto Letter From Birmingham Jail. This letter was inspired by a group of white clergymen who had condemned his activism.

Martin Luther King Jr. continued working with religious and civil rights group and in August of 1963 led protest marches which were attended by over 250,000 people. It was the scene of King’s famous I Have A Dream speech which took place on the steps of the Lincoln Memorial. The speech won accolades and resulted in King being named TIME’s Man of the Year in 1963.

When violence erupted between peaceful demonstrators and white segregationists in Selma, Alabama in 1965, coverage was shown on television and shocked the nation. President Johnson supported a subsequent protest march in Montgomery led by King. The following August the Voting Rights Act was passed by Congress which guaranteed African American citizens the right to vote.

King’s later years were marked by a division which emerged between his non-violent approach and young radicals. During the mid to late 1960s, King focused on the role of poverty in American society as well as issues relating to the Vietnam War. The Poor People’s Campaign was instigated in 1967. On the 4 April, 1968 Martin Luther King Jr. was assassinated. He had been standing on a balcony in a motel in Memphis when he was shot. Riots broke out across many cities in America, and the president declared a day of mourning. King’s assassin was James Earl Ray (b.1928-d.1998).

In 1983 a bill was signed making the third Monday of every January a U.S. federal holiday in honor of King.