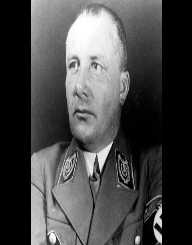 Martin Bormann was the head of the Nazi Party Chancellery and an important official in Nazi Germany. He began as acting secretary to Hitler in 1935 and was officially appointed in 1943. He gained entry and acceptance into Hitler’s inner circle and accompanied Hitler everywhere.

He used his position to control the flow of information and access to Hitler and succeeded in achieving great power. He received many Nazi Awards. After the war, Bormann was tried in absentia by the International Military Tribunal in the Nuremberg trials.

Martin Bormann was found guilty and convicted of war crimes & crimes against humanity and sentenced to death by hanging.

Martin Bormann was born on 17 Jun 1900 in Wegeleben, Germany. His father Theodor Bormann was a post office employeeand his mother Antonie Bernhardine was the second wife. Martin lost his father when he was three, and his mother remarried.
Bormann studied at an agriculture trade high school.

Martin Bormann discontinued his studies and joined the 55th Field Regiment in Jun 1918 during the last days of the First World War. After the war, he started work at a cattle feed mill. He left soon and became an estate manager of a large farm at Mecklenburg. Bormann’s racial views were apparent when he joined an anti-Semitic landowners association.

Hyper inflation in the Weimer Republic increased the value of foodstuffs stored in farms and estates. Many estates hired Freikorps units to guard their stores. Bormann joined the organization acting as section leader and treasurer in 1922.

On 17 Mar 1924, he was sentenced to a year in prison. He was named as an accomplice of Rudolf Hess in the murder of Walter Kadow. On being released in 1925, he joined the short lived NSDAP paramilitary organization. He then returned to his work at Mecklenburg.

In 1927 Martin Bormann joined Nazi party: NSDAP and in 1937 the SS. Bormann took up a job with a weekly paper ‘National Sozialist’ edited by NSDAP. He made up for his lack of public speaking skills by developing his organizational skills as a business manager for the region.

In Oct 1928 Martin Bormann shifted to Munich and worked in the SA insurance office. The insurance companies were reluctant to pay claims to members killed or injured in political activities. Bormann set up an NSDAP Auxiliary Fund and administered funds directly. Each member had to pay a premium and received compensation for injuries.

His reputation as a financial expert was lauded. In 1930 NSDAP won 107 seats in the general election and party membership, and funds grew. He also founded the National Socialist Automobile Corps which coordinated use of donated vehicles and training of party members in automobile skills.

In 1933 Martin Bormann took up the post of Chief of Staff in the office of Deputy Fuhrer Rudolf Hess. He was Hess’ secretary from Jul 1933 to May 1941. In Oct 1933 Hitler named him “Reichsleiter” of NSDAP (national leader-the highest party rank) and made him

In Berghof Martin Bormann managed all the personal finances of Hitler and acted as his secretary. He was used by Hitler to communicate his orders to subordinates and thus gained an advantage over other high ranking officials. He started controlling information and access to Hitler.

Martin Bormann was able to influence civil appointments and promotions. Bormann took notes of Hitler’s thoughts and monologues. These were later published after the war as ‘Hitler’s Table Talks.’ Bormann set up the Adolf Hitler Fund of General Trade and Industry. He collected money from German industrialists for Hitler’s personal use.

During the War Hitler concentrated more on foreign affairs and war. As the war progressed, Hess was concerned that Germany would be attacked from two fronts. He flew to Britain to negotiate peace but was arrested on arrival and spent the rest of the war in prison.

Hitler considered it a betrayal and assigned all of Hess’ duties to Bormann. He was made ‘Head of the Party Chancellery,’ and on 12 Apr 1943 officially appointed him as his secretary.

Martin Bormann passed the ‘Edict on terminal law and practices against Poles and Jews in the incorporated Eastern territories in 1941. He had total control and advocated harsh treatment to Jews and prisoners of war. He signed the decree that recommended extermination of minorities in Nazi Death Camp as ‘Final Solution’ for Greater Germany on 9 Oct 1942.

On 29 Apr 1945, Martin Bormann signed the last will and testament of Hitler with William Burgdorf, Goebbels, and Hans Krebs. He was named an executor of the estate and then named Party Minister after Hitler’s suicide.

On 2 May 1945 when trying to escape Soviet encirclement Bormann and SS doctor Slumpfogger were found dead on a bridge near the railway switching yard by Hitler Youth Leader Artur Axmann.

There was a general uncertainty about his death since the Soviet did not admit finding him. A widespread search was organized for his whereabouts. On 15 Oct 1946, he was tried in absentia and sentenced to death by hanging at the Nuremberg trials.

The bodies were identified as Bormann and Slumfogger in 1973, and facial reconstruction and genetic testing confirmed it in 1998.