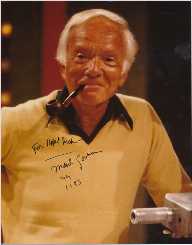 Mark Leo Goodson was born in the city of Sacramento, California, on January 14, 1915. His parents, Fannie and Abraham, were Russian immigrants. As a child, he acted in several plays together with the Plaza Stock Company. He studied political science and economics at the University of California at Berkeley. While there, he performed in college plays and he worked in a fish market. He graduated in 1937.

Mark Goodson first worked as a disc jockey at the KJBS radio station in San Francisco. He then hosted a radio game show on the KFRC station, called “Pop the Question.” He moved to New York City in 1941. He worked a variety of jobs at radio stations. He announced several game shows, such as The Jack Dempsey Sports Quiz. In 1946, he met a radio director and writer named Bill Todman. They soon started to work together. Their collaboration lasted for decades.

The first game show created by Goodson–Todman Productions was called Winner Take All. It featured two contestants competing by answering general knowledge questions. The company went on to produce dozens of game shows. They became very popular, and they often had celebrity contestants. They aired on several television channels, such as CBS, NBC, ABC, and BBC. Some versions were produced in foreign countries, including Germany, Spain, and others.

Mark Goodson was the creative force behind the company. He came up with many new ideas, such as using a bell and a buzzer, that are still used in game shows around the world. Apart from game shows, he also produced a few films, including the westerns Jefferson Drum, The Rebel, and Branded. Todman passed away in 1979. Goodson took over the company and named it after himself.

Mark Goodson's shows won many Daytime Emmy Awards. In 1990, he won an Emmy Award for Lifetime Achievement. Two years later, he was chosen into the Television Hall of Fame.

Mark Goodson passed away on December 18, 1992, after a battle with pancreatic cancer. He died in New York City, and he was buried in Culver City, California. After his death, his family sold the production company. Five of the game shows he created are still on the air – The Price is Right, Family Feud, To Tell the Truth, Match Game, and Beat the Clock.