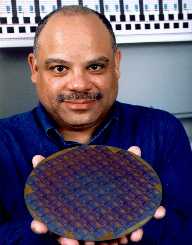 Mark E. Dean is an American computer engineer and inventor. Born on March 2, 1957, he is a co-creator of the IBM personal computer, released in 1981. For this, he holds three of the nine PC patents. Dean is a member of the team that developed the ISA bus. Afterward, he led a design team that created a one-gigahertz computer processor. In his blog published in August 2011, Dean revealed he had replaced his PC with a tablet computer.

Mark E. Dean was born on March 2, 1957, in Jefferson City, Tennessee. His father was a supervisor at the Tennessee Valley Authority. He showed a keen interest in technology and building things as a child. This passion would ultimately become a career. With the help from his father, he made a tractor from the beginning.

Dean was a brilliant student and multi-talented. Aside from excelling in education, he was also a talented athlete. He attended Jefferson City High School. Following his graduation, he enrolled at the University of Tennessee, where he studied engineering. He graduated with a bachelor’s degree in electrical engineering in 1979. He, therefore, continued his education at Florida Atlantic University, where he earned his master’s degree in electrical engineering. Subsequently, Dean enrolled at the Stanford University for his Ph.D.

After graduating from college, Dean gained employment at IBM. That began his association with the company he worked for throughout his career. Starting as an engineer, he worked closely with the likes of Dennis Moeller. The two worked together to develop the new Industry Standard Architecture (ISA) systems bus. The ISA enabled direct connections between devices like printers, and modems and personal computers. In addition to this significant development, Dean led the team that developed color PC monitor. Also, he led the team of engineers that created the first gigahertz chip at IBM's Austin, Texas in 1999. He was the CTO for IBM Middle East and Africa. Dean also became the IBM Vice President with oversight on Almaden Research Centre in San Jose, California. He owns three patent out of IBM’s nine original patents. He currently has more than 20 patents.

Dean is currently the interim dean of the Tickle College of Engineering. He also adds as the John Fisher Distinguished Professor at the University of Tennessee’s Department of Electrical Engineering and Computer Science.

Dean received induction into the National Investors Hall of Fame in 1997. He became the first Black-American IBM Fellow, the highest level of technical excellence at IBM.