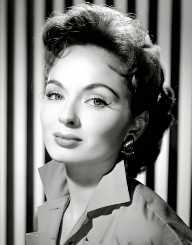 While still in high school, Marguerite McNamara was asked by a modeling agent, John Robert Powers, to join his agency. He had seen some photos of her that were taken at one of her friend’s. Her mother encouraged her to go ahead, and so she began modeling in her teenage years.

Marguerite McNamara became a very successful model, appearing in some of the most popular publications at the time, including, Seventeen, Life, Harper’s Bazaar, and Vogue.

When Marguerite McNamara graced the cover of Life magazine for a second time, in 1950, she was offered a movie contract by producer, David Selznick. She turned him down, preferring instead to continue with her modeling. By this time, she was also studying dance and acting.

Marguerite McNamara debuted on the stage in 1951. Her first role was in The Moon Is Blue, playing in Chicago. Her second performance was in The King of Friday’s Men, which played on Broadway but was very short lived.

In 1953, Otto Preminger adapted the play, The Moon Is Blue, to film. Marguerite McNamara was cast in the same role for the movie. 20th Century Fox soon signed her after the film was complete, and she made two more movies, Three Coins in the Fountain (1954), and Prince of Players (1955). The movies were well-received, but McNamara refused any more film roles and spent the next few years out of the limelight.

In 1962 she did go back to take roles in two Broadway productions. Marguerite McNamara only made one more movie, The Cardinal, and that was eight years later, in 1963.

Over 1963 and 1964 she made guest appearances in five television series, but that was all.

It is thought McNamara’s career wasn’t sustainable for long as she didn’t play the Hollywood ‘game’ expected of actresses at the time. She refused to move to Los Angeles, and she wouldn’t do publicity for her movies, including photos. Compounding her attitude towards her work, her marriage ended in divorce, and she also suffered from a nervous breakdown and depression.

After finishing with acting, Marguerite McNamara took on temp assignments as a typist and continued with the typing work over the next 15 years or so to make her living.

McNamara’s best-known work was The Moon Is Blue. Although the content of the movie would be totally acceptable in the present day, at the time it was made, it was very controversial for its sexual themes and open dialogue.

At the time, the movie wasn’t given approval from the MPAA, but United Artists decided they would release the movie anyway. It was banned in several states, but even so, went on to be a success at the box office. Naturally, the reviews were mixed because of the type of movie it was.

Marguerite McNamara was nominated for an Academy Award for Best Actress for her role in the movie.

Marguerite McNamara married David Swift, an actor, and director, in 1951. They divorced several years later, with no children.

In 1978, sadly, at the age of 49, McNamara’s body was found in her New York City apartment. She had deliberately taken an overdose of sleeping tablets and tranquilizers. She had suffered from a history of mental illness, including depression.