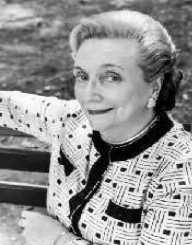 Margaret Truman was an American socialite, singer, writer, and radio and television performer.

Mary Margaret Truman was born on February 17, 1924, in the city of Independence, Missouri. Her father was Harry S. Truman, a politician and the future President of the United States. Her mother was Bess Wallace Truman.

Margaret Truman attended school in Independence and Washington, D. C. In 1946, she earned a bachelor’s degree in history from George Washington University.

After graduating, Truman underwent vocal training as a classical soprano singer. Over the next few years, she performed with the Detroit Symphony Orchestra, the National Symphony Orchestra, the Philadelphia Orchestra, and the Los Angeles Philharmonic. She also joined her father on several campaign trips during his presidency. In 1951, she recorded an album of American and German songs.

Margaret Truman then began to appear on the NBC Radio Network. She took part in the shows The Railroad Hour, Screen Directors Playhouse, Weekday, and The Big Show. On television, she performed on The Martha Raye Show and The Gisele Mackenzie Show. She also appeared as a guest in the popular game show What’s My Line.

In 1956, Margaret Truman published her autobiography, titled Souvenir: Margaret Truman’s Story. In 1969, she wrote White House Pets, a book documenting the pets owned by various presidents. In 1973, she published Harry S. Truman, an official biography about her father which gained great success. Three years later, she published Women of Courage, a book exploring the lives of 12 prominent women.

Around this time, she joined the board of directors of the Roosevelt Institute and the Harry S. Truman Presidential Library and Museum. In 1981, she released a collection of her family’s private letters, titled Letters from Father: The Truman Family’s Correspondence. She later released more private documents in the collection Where the Buck Stops: The Personal and Private Writings of Harry S. Truman. In 1986, she published Bess W. Truman, an official biography about her mother.

In 1980, Margaret Truman began a series of murder mystery novels. She published over two dozen of these novels in the next three decades. Some of the titles included Murder in the White House, Murder at the FBI, Murder at the Pentagon, Murder at the National Gallery, and many others. However, a writer, named William Harrington, later came forward and claimed that he had ghostwritten the books.

In 1995, Truman published the non-fiction book First Ladies. In 2003, she wrote about her experiences in the book The Life of a White House Girl. In 2004, she published her final non-fiction work, titled The President’s House: 1800 to the Present.

Margaret Truman married Clifton Daniel, the managing editor of The New York Times, in 1956. The couple often hosted lavish parties in their home for the New York elite. They had four sons, named Clifton Jr, William, Harrison, and Thomas.

Margaret Truman died of respiratory infection in her home in Chicago on January 29, 2008. Margaret Truman was 83 years old. Her ashes were interred at the family burial plot near the Truman Library in Independence.