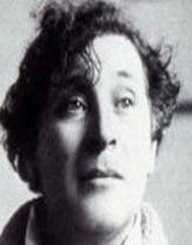 Marc Zakharovich Chagall was a painter. He was a Russian but later acquired French Nationality. He acquired skill in many artistic styles such as painting, and fine arts.

Marc Chagall was born as Moishe Segal in a Lithuanian Jewish Hassidic family in Liozna near the town Vitebsk on 6th July 1887. Vitebsk was called “Russian Toledo.” The city was destroyed during WWII.

Marc’s father Khatskl Shagal had a job with a fish merchant. His mother, Feige-Ite was running a provision store at home. The couple had nine children, and Chagall was the eldest one. Khatskl Shagal worked hard to make both ends meet.

Jewish children were banned from joining Russian schools or universities. They were also not allowed to move in the city freely. Marc Chagall attended a primary school. The school was Jewish and religious. Marc studied Hebrew and Bible.

Her mother tried to admit Marc in a Russian high school but was refused admission. Her mother offered 50 roubles to the headmaster for admission.

Marc Chagall observed his classmate drawing, and he decided to pursue painting as his career. Marc started drawing pictures from the drawing books he found in the library. He joined the studio of Yehuda Pen. Pen realized the financial problems offered to teach Marc free of any fee. Chagall did not appreciate the academic representation of pictures.

In 1906, Marc shifted to Saint Petersburg, the capital of Russia which housed many well-known art schools. Marc joined a prominent art school for study for two years. Within a short period of one year, Marc was able to paint real-life pictures and sceneries.

For the next two years during 1908-1910, Marc Chagall was a student of Leon Bakst at Zvantseva School of Drawing and Painting. Leon Bakst was a designer of ornamental art and was well known for costumes designing. Marc continued to stay in Saint Petersburg until 1910. Here he came in contact with Bella Rosenfeld.

Marc in 1910, moved to Paris to cultivate his artistic style. He made friends with contemporary celebrities. He also joined the Academie de la Palette, where new ideas are being experimented. He also worked in a college. During free time, he used to visit many art corridors. Marc acquired the skill of water-color painting in Paris.

Marc Chagall visited Berlin at the invitation of a noted art businessman to display his work, though the real desire was to meet Baal-Teshuva. The exhibition was a big success. Marc desired to stay in Vitebsk until he married Bella. Due to WW1, the Russian boundary was closed for an indefinite period. He could marry Bella a year later.

Marc continued displaying his artwork during 1915-1916 in St Petersburg. Marc came to limelight by these displays. He was just 30 years then. His artworks began to be sold.

During 1917, Revolution, Marc became the commissar of arts for Vitebsk and later established the Vitebsk Arts College. It is now recognized as the most prestigious school of art in the Soviet Union.

Marc Chagall relocated to Moscow to accept the task of a stage designer of the State Jewish Chamber Theater. For its inauguration, he created wall paintings which featured dynamic subjects like dancers, fiddlers, etc. During the WWI there was famine in Russia and March had to reside in a small house near Moscow. In 1921 he worked as a teacher for arts.

He decided to move to France in 1922, for developing arts in a better country. During the waiting period for the exit visa, Marc wrote his autobiography.

Marc Chagall traveled to France during 1923 via Berlin to reach Paris. He had business interests with an art dealer Ambroise Vollard. He showed interest in developing etching. Marc showed his paintings, artwork in France. By 1926-27, Marc made a name in the French art World. His name was added on in the Modern French Painters. He traveled all over France enjoying the greenery and the blue Mediterranean Sea. He had exciting experiences in travel.

Vollard requested Marc to show the Old Testament. Marc thought he could complete the task by staying in Paris, traveled to Israel to see the Holy Land in 1931. He worked on The Bible with all his heart during 1931-1933.

Marc returned to France, and in a year, he finished 66 plates by 1939. The entire work was finished in 1956. Many critics stated that Marc was the most celebrated graphic artists of the 20th century.

There was turmoil when the WWI began, and the Nazis started punishing the Jews. The American Consulate helped Marc to escape to the US. Marc and his wife Bella reached New York in 1941. Their daughter Ida and her husband carried the works of Marc in an immigrant ship. Konrad Kellen, an intelligence analyst, at the request of Ida, brought back many remaining paintings to the US.

Marc Chagall received the Carnegie Prize in 1939 for his painting “Les Fiancés.” Marc felt uncomfortable in the new environment as he could not speak the new language. However, he had attained the international standing. In New York, Marc got acquainted with many artists like Piet Mondrian and Andre Breton.

Marc designed dresses for the Aleko Dance in 1942. New York Turbine was all praise for Marc. In 1943, he got interested in the happenings of WWII and started depicting the events in his art. Marc was depressed when he learned that his hometown, Vitebsk, has been destroyed by Germans.

During 1944, Marc Chagall lost his wife, Bella due to viral infection. She could not get proper treatment as there was a severe shortage of medication. Marc discontinued his work for a long time. He started painting Bella’s reminiscence.

In 1946, The Museum of Modern Art in New York displayed the works of Marc spanning over 40 years. But in 1947, after Paris was liberated, Marc traveled to Paris. In Paris, he witnessed the display of his works at the Musee National d’Art Moderne. Marc again moved across Europe and decided to live in Cote d’Azur which was the center of “arts.”

In 1954, Marc Chagall helped Robert Helpmann in decorating a set at the Royal Opera House. He did not continue the work. He continued creating wall tiles, painting on vases, plates, and cups, wall hangings, painting on glass panes and so on for many years.

In 1963, Chagall signed a contract to paint the new ceiling of Paris Opera. There were many objections to this contract since Marc was a Russian Jew. Marc completed the work in one year. His painting was open for the public in 1964.

The work was acknowledged as the most significant donation to the French philosophy.

Marc Chagall in 1964 designed a glass window in the United Nations in memory of Dag Hammarskjold, UN Secretary-General who died in an aircraft accident in 1961. The window was designated as “Peace.”In 1967, the window was bestowed to John D. Rockefeller. Marc designed five large glass windows for the Fraumunster church in Zurich in 1967. He continued designing windows for many other well-known churches and others through the years to follow.

Marc Chagall met Bella Rosenfeld in Vitebsk during one of his visits. The WWI delayed their marriage in 1915. The couple had a child, Ida. In September 1944, Bella died due to a virus infection. She could not be treated due to a shortage of medicine during wartime.

After Bella’s demise, Marc stayed with Ida’s family for a year. He had an affair with Virginia Haggard, daughter of an envoy Sir Godfrey Digby Napier Haggard for seven years. They had a child, David McNeil in June 1946. In 1952, Virginia Haggard separated from Marc to live with a photographer Charles Leirens. She also became a professional photographer.

Ida thought that her father had missed a companion at home. She introduced Viva Valentina to her father. She first became his secretary and later became his wife in July 1952. There was some misunderstanding between Ida and Viva. Marc and Viva divorced in 1958 but married again with conditions suitable to Viva.

Honorary degree in Las by Brandies University in 1960

Worthy Citizen of Jerusalem in 1977, the Grand-Croix de la Legion d’honneur by the French Govt. in 1977

Master of the Royal Academy of Science, Letters and Fine Arts of Belgium

Some countries have issued commemorative stamps in his honor. The home of Marc in Vitebsk has been converted into a Museum The 2014 Olympics in Sochi honored Marc by a Chagall-like hover.