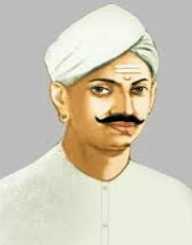 Mangal Pandey was born on July 19, 1827. He was an Indian soldier. He played a significant role in inciting the Indian Rebellion of 1857. He served as a sepoy with the British East India Company. He was at the forefront in the protest of the cartridges that were greased that were being distributed to soldiers by the British. Pandey convinced other soldiers to join him in the protest against the British for being issued with cartridges that were greased with either cow or pig fat. The soldiers were staunch Hindus, and the soldiers did not take the matter lightly as it was against their religion to bite on cartridges that had been greased with animal fat.  After he confronted the British, he was arrested and executed later on. His death led to the Indian Rebellion of 1857 as mutinies arose in various parts of the country. He died on April 8, 1857.

Mangal Pandey was born on July 19, 1827, in Nagwa, Ballia District, Uttar Pradesh. He was born into a Brahmin family. He was born to Divakar Pandey and his wife. His father was just but a peasant. He had a sister who died during the famine that started in 1830. Pandey grew up an ambitious young man

In 1849, Mangal Pandey joined the army of the British East India Company. At this time he was only twenty two years of age. He was made a soldier, that is, a sepoy in the 6th Company of the 34th Bengal Native fraternity. In his regiment, he met other Brahmin young men who had also been recruited into the army. Pandey started losing interest in the military as time went by.

In the 1850s a new Enfield rifle was introduced in India, and the cartridge was rumored to be greased with animal fat, mostly cow and pig fat. To load the gun, the soldiers would have to bite off the ends of the greased cartridges. The use of these animal fats was not accepted by the Indian soldiers as the consumption of animal fats was against their religion. The cow in the Hindu religion is considered holy, and the pig is unacceptable in the Muslim religion. Pig is considered unclean, and therefore it would have been an abomination if the soldiers ingested the fats while loading the rifles.

The Indian soldiers did not take the matter lightly as they thought that the British disregarded their religion. They concluded that that was a deliberate action by the British. Mangal Pandey was not impressed with what the British had done and so he decided to confront them being that he was a staunch Hindu. He decided to take violent action against the British for disregarding his religion. On March 1897, he paced in front of the regiment’s guard room armed with a loaded musket. His mission was to kill any European he sees first. He was joined by some of the Indian soldiers.

Lieutenant Baugh learnt of the revolt and went to remedy the situation. On arrival on his horse, he was shot at by Mangal Pandey. The bullet missed and hit his horse instead. The lieutenant was injured because the horse went down with him. The Lieutenant took out his pistol and shot at Pandey. His bullet missed and Pandey attacked him with a talwar and injured him so severely with it. Another Indian soldier, Shaikh Paltu, tried to restrain Pandey.

Sergeant Major Hewson heard of the fight and went to the aid of the lieutenant. He was hit from the back by Mangal Pandey who used his musket. Other Indian soldiers did nothing; they just stood in the sidelines watching what was happening. When other British officers came to the scene, Pandey tried to kill himself to evade arrest. He shot himself in the chest but it was not a fatal wound and so he was arrested and brought to trial.

Mangal Pandey was tried and sentenced to death after his arrest. He was executed by hanging on April 8, 1857. He was to be executed on April 18, 1857, but the British were afraid that another revolt would break out if he were held longer. The Indian rebellion of 1857 broke out as Indian soldiers started revolting in various parts of the country. In India, he is considered a freedom fighter. In 1984, the Indian government issued a postage stamp to commemorate him.