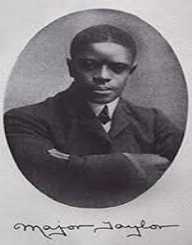 Major Taylor was an African-American cyclist who held several world records. He began professional cycling and racing at the age of eighteen, and after fourteen years of competing, he retired at the age of thirty-two.

His early retirement was contributed to by the intense racism that swept across America. He spent his later years desperate and broke died on June 21, 1932.

Major was born Marshall Walter Taylor on November 26, 1878, to war veteran Gilbert Taylor and Saphronia Kelter Taylor. He was born in Indianapolis, Indiana where his parents had settled after moving from Louisville, Kentucky.

He was tutored at a neighbor’s house in Indianapolis alongside his friend Daniel. He became part of Daniel’s family and lived with them enjoying the privileges he could not find at home. However, he returned to live with his parents when Daniel’s family moved to Chicago.

Major Taylor was frustrated with the condition back at home and wished for a better life. Daniel’s family had bought him his first bicycle while he still lived with them which he enjoyed riding. By 1892, he had become an expert at doing stunts with the bike and was a good cyclist as well.

A bicycle shop owner named Tom Hay spotted him and arranged for him to perform the stunts in front of his shop. He was paid 6 U.S Dollars per week and received a free bicycle from Hay. He earned the nickname ‘Major’ because of the military dress code he wore while doing the bicycle stunts.

Major Taylor left Hay’s shop and started working for Harry T. Hearsey's bicycle shop in Indianapolis in 1893 as chief trainer. He trained the locals there how to ride the bicycle.

While working at Hearsey’s he met and befriended Louis D. Munger the owner of the Munger Cycle Manufacturing Company in Indianapolis. He took a job at the company as messenger and trainer of the local high schools and colleges. Munger also trained him to become a professional cyclist, and he became a member of the see-saw cycling club in Indianapolis.

As a teen, he engaged in short races in which he became the winner in each of the races. At the age of eighteen, he moved to Worcester, Massachusetts to begin professional racing. He participated in his first race which was a six-day race at Madison Square Garden in New York City finishing eighth.

Major Taylor came to the limelight in at the beginning of 1898 when he garnered a total of seven world records. In 1899, he became both the national and international world champion making him the second African-American athlete to be crowned a world champion.

He traveled the world competing in several races including Australia, Europe and most countries in North America. However, he had to keep up with the struggles of racial segregation in the competitions as black athletes were not valued.

Major Taylor would be insulted by white fans and fellow white cyclist who only wanted to intimidate him. This kind of experience killed his morale to compete especially in America. In one occasion during a race in Boston, one cyclist by the name W.E. Becker knocked him off his bike and leaving him unconscious.

With the intense racism and intimidation he experienced, he decided to retire at the age of thirty-two. With the money he earned from racing, he opted to start a business which in the end never proved successful.

He ended up losing his earnings and became so desperate and broke. In 1930 he traveled to Chicago to sell an autobiography of his own titled ‘The Fastest Bicycle Rider in the world’ which never marked good sales.

Major Taylor lived in Bronzeville in Chicago at the YMCA Hotel after becoming estranged from his wife and kids. He suffered from a heart attack in March 1932 and was admitted at the Cook County Hospital's charity ward.

Major Taylor died on June 21, 1932, at the age of fifty-three survived by his wife and daughter who never knew about his death. He was buried at the welfare section of Mount Glenwood Cemetery in Cook County, Illinois since no one had claims on the body. In 1948, his remains were exhumed with arrangements by a group of former bicycle racers who gave him a proper burial in a more prominent location of the cemetery.