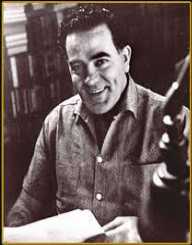 Louis L'Amour was an American writer and novelist famed for his elaborate Western cowboy and Red Indian stories.

Louis Dearborn LA Moore was born on March 22, 1908, in North Dakota. His parents were Louis and Emily LaMoore. He changed his name when he started writing novels in the 1930s. The last born in a family of seven children, L’Amour shared mixed European ancestry. His father’s side was of French descent, while his mother was of Irish American heritage. Both of them were veterinary medical practitioners.

L’Amour never graduated from school. His parents left North Dakota in 1923. They were living on the road. Having passed through numerous states in the western shores of the US, they settled in Choctaw, Oklahoma State. This was the early 1930s. During this period, he traveled and worked in Europe, Asia, North Africa, and Arabia. This experience proved vital in his later life.

Louis L'Amour was a chip off the block. After his voyaging ventures, he returned home and started documenting all his travels. His stories were ignored in the industry at first. His breakthrough came in 1938. Local magazines incorporated his stories in their publications. Gradually, L’Amour’s stories began to be appreciated. Adding to his seafaring stories, he also wrote some crime stories and a western cowboy film in the 1930s.

His budding career was cut short by the WW2. L’Amour was enlisted into the military and taken to Europe. After the war, he returned to America and continued writing. With no military obligations, L’Amour started writing for the Dime Magazine in 1946. His first publication was Law of the Desert Born. He continued writing for several magazines until 1950.

Louis L'Amour then changed to novel writing. His western cowboy novel Hondo was released in 1953. His breakthrough had come. The book was adapted into a Hollywood film in 1954. Despite his success with Hondo, L’Amour continued writing his voyaging stories. His star rose rapidly with his readers appreciating his western cowboy themes. Another western novel Flint was released in 1960. Three years later, he published Catlow. One of his novels Sacket Family was later co-opted into a television series in 1979.

His influence was not only to readers but movie lovers as well. Over 30 of his novels found their way to Hollywood. Some of the novels turned into films were Kilkenny and Guns of the Timberland. Both novels were written and published in the 1950s.

Louis L'Amour was married to Katherine Adams on February 19, 1956. They were together until his death. The couple had two daughters. They were Beau and Angelique.

Louis L'Amour's first major award came in 1972. L’Amour got an Honorary Ph.D. in recognition of his work. The awarding institution was Jamestown College in North Dakota. Seven years later in 1979, one of his novels Bendigo Shafter won him the US National Book Award.

L’Amour also got some political recognition. He got the Congressional Gold Medal in 1982, the highest honors bestowed to anyone by the US Congress. The US 40th president, Ronald Reagan, presented him the Presidential Medal of Freedom. His home state North Dakota honored him with the Roughrider Award. This is an award awarded by the North Dakota governor.

Louis L'Amour's life was cut short on June 10, 1988, in Los Angeles. Official reports said he died in his home, and the cause of death being lung cancer. His remains were interred at the Forest Lawn Memorial Park Cemetery in Los Angeles.

Born in the deep farming ranches of North Dakota, L’Amour never grew up with the luxury of urban life. Though privileged at first, he was forced out of school. Despite the childhood setbacks, he took up the traveling experiences to his advantage. Most of his novels were fictional scenes. His imagination having been shaped by the voyages he had when he was in his youth.

Like most parents, L’Amour’s parents hoped he would follow in their footsteps. They thought he would be a veterinary doctor. He was a chip off the block. His inclination for adventure gave him another way of expressing his genius inside him. He gave the American society and the world audience the real picture of the Wild West adventures.