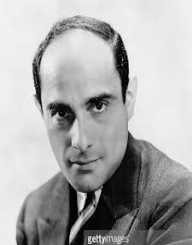 Lorenz Hart was an American classical composer who lived between 1895 and 1943.

Lorenz Hart was born to Jewish parents on May 2, 1895, in New York. His parents Max and Freida Hart were immigrants from Germany. He was the first born of the two brothers.

Their parents sent them to private learning institutions. Hart studied at Columbia Grammar and Preparatory School. He then joined the Columbia University School of Journalism.

Lorenz Hart was fluent in the German language. In 1916, he got a job from Shubert Brothers. His role was to translate German plays into English. He met his longtime musical partner Richard Rodgers in 1918. Hart was then 23 years, while Rodgers was 16 years. The pair became close friends.

They began writing songs for amateur producers. This included several songs for the Varsity Show concert in Columbia University.

Lorenz Hart's music partnership with Rodgers lasted for 25 years. Their early compositions were adapted into musical comedies. In 1919, their song Any Old Place With You was co-opted into a comedy production at Broadway Theater.

The following year, the comedy Poor Little Ritz Girl featured six of their songs. From 1920 to 1930, the duo did many songs at Broadway and West End theaters in New York. In 1925, Hart and Rodgers got their breakthrough at broadways. They made a debutant show of their own.

The show which was named The Garrick Gaieties propelled them into the limelight. Hart and Rodgers went on to write songs for 26 musical shows at Broadway. Their most memorable songs were The Boys From Syracuse, Babes in Arms, On your Toes, A Connecticut Yankee, and Pal Joey. Great personalities in music have performed their songs.

They include Frank Sinatra, Ella Fitzgerald, and Carly Simon. Hart was more of a playwright than a songwriter. Most of his songs had an acting flair in them. They were more elaborate when acted than sung.

Lorenz Hart and Rodgers did recordings for movie films. They moved to Hollywood in 1930. In 1932, the duo produced hits like Love Me Tonight, The Phantom President, and the Blue Moon. The song Blue Moon was later done by rock and roll legend Elvis Presley. Three years later, Hart and Rodgers did the song Mississippi.

Hart and Rodgers then returned to stage musicals in 1935. The Broadway producer had prevailed on them to come back. They performed several songs at the Broadway Theater. Some of the songs were The Most Beautiful Girl In The World and The Little Blue Girl.

The pair of Hart and Rodgers broke up in 1943. Rodgers then teamed up with Oscar Hammerstein to do the song Oklahoma. Hart came back to the group the same year. They did a new version of A Connecticut Yankee.

The new version was to include six other songs. The song appeared on Broadway on November 17, 1943. That was Hart’s last live musical performance.

Lorenz Hart was a musical genius. His private life did not match the public charm. Hart was below 5 feet in height. He suffered from dwarfism. When the WW1 broke out, he was not drafted into the military.

His father was a harsh disciplinarian. Hart found comfort in alcoholism. His alcoholic trends made him break up with Rodgers late in his life. Hart fell in and out of depression several times. His mother was his only real companion. When his mother died in April 1943, Hart was devastated.

Lorenz Hart fought to hide his homosexual inclination. First, he was Jewish. That meant the community would have excommunicated him. In the extreme, they would have killed him. Second, American society then was puritan. Homosexuality was a grave pervasion of God’s will. His private life off the stage was secluded.

Lorenz Hart died on November 22, 1943. The official cause of death was complications from pneumonia. He was buried at Mount Zion Cemetery in Queens, New York. In his lifetime Hart wrote 37 songs. He also did 13 stage musicals.

The MGM film company was inspired to do a feature on Hart in 1948, and this was due to his excellent music career. Hart was a trendsetter. Various musicians have copied his music style.

Sadly, Lorenz Hart had no family of his own. He died at age 48 years, with no marriage or children.