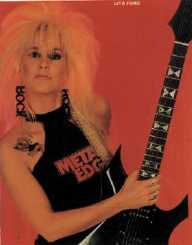 Heavy metal guitarist and songwriter Lita Rossana Ford was born on the 19 September 1958 in London, England to an English father and an Italian mother. When she was a child, her family relocated to the United States. Growing up, Ford became interested in music and began to play guitar at a young age.

Lita Ford became a member of an all-female rock band, The Runaways when she was sixteen. Their debut album was recorded in 1976 and was met with some success. They toured during the 1970s and eventually disbanded in 1979.

After the breakup of The Runaways, Ford concentrated on forging a career as a solo artist. She released her first album, Out for Blood, in 1983. Her second album Dancin’ on the Edge (1984) contained Fire in My Heart which had some airplay and reached the charts in a few countries. Her album Lita (1988) contained Close My Eyes Forever with Ozzy Osbourne and charted on the US Billboard Hot 100 making it to number eight. Stiletto followed in 1990 and Dangerous Curves (1991). A break from recording followed her next album Black (1995). Then in 2008 Ford teamed up with a new band and went on tour. Wicked Wonderland was released in 2009 and Like a Runaway in 2012. And Time Capsule (2016)

Lita Ford published an autobiography in entitled Living Like A Runaway, a Memoir in 2016.

Ford was engaged to Tom Iommi of Black Sabbath, but they did not marry. She was married to Chris Holmes and in later married Jim Gillette. She had two children with Gillette. In 2011, the couple divorced. Lita Ford later claimed that her husband was a controlling partner who brain-washed her against music.