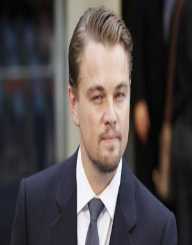 Leonardo Wilhelm DiCaprio was born on November 11, 1974, in Los Angeles, California. He was the only child of his mother Irmelin, a legal secretary and his father George, a comics artist, and producer of comic books. He was given his name because his mother was looking at a Leonardo da Vinci painting in Italy when he first kicked.

DiCaprio’s parents separated when he was one year old. He lived mostly with his mother, who was working several jobs to support them. DiCaprio attended Seeds Elementary School and later, John Marshall High School. He dropped out of high school. DiCaprio spent a part of his childhood in Germany, living with his grandparents.

DiCaprio started his acting career by appearing in several commercials and educational films. His first work was on the TV series Romper Room when he was 5, but DiCaprio was removed for being disruptive. His break out role was on the TV series Parenthood in 1990. He also starred on several other shows, like The New Lassie and Roseanne. His film debut was on the 1991 horror film Critters 3. DiCaprio’s big break came in 1992 when he was handpicked by Robert De Niro to star in the film This Boy’s Life. The role was a breakthrough for DiCaprio in Hollywood.

In 1993 DiCaprio starred as a mentally disabled boy in What’s Eating Gilbert Grape. The film became a critical success and earned him both Academy Award and Golden Globe nominations. His next projects were The Quick and the Dead and Total Eclipse. One of his most successful early career films was the 1996 film Romeo +Juliet- a modernized version of William Shakespeare’s romantic tragedy.

In 1997, Leonardo DiCaprio was cast in James Cameron’s Titanic. He initially refused the role of Jack Dawson, a penniless man who wins a ticket on the RMS Titanic. Cameron encouraged him to pursue the role, and Titanic ended up being the highest grossing film of all time, until 2010. Titanic earned more than $1.843 billion in box office receipts and transformed DiCaprio’s career into being a movie superstar.

After the major success of Titanic, which started the so-called “Leomania,” DiCaprio went to star in 1998 film Celebrity and The Man in the Iron Mask. Although a box office success, both films received mixed and quite negative reviews. In 2000, DiCaprio starred in the highly successful film The Beach. This project was followed by 2002 film Catch Me If You Can, a biographical crime drama based on the life of Frank Abagnale Jr. The same year, DiCaprio was cast in the lead role in Martin Scorsese’s Gangs of New York. The critics acclaimed his ability to portrait various characters. DiCaprio’s next project was 2004 film The Aviator, which also marked DiCaprio's debut in directing, together with Martin Scorsese. His performance earned him the Golden Globe Award and Academy Award nomination.

In 2006, DiCaprio starred in two films- The Departed and Blood Diamond. In The Departed, DiCaprio once again collaborated with Scorsese, and the film was a critical and box office success, earning $213.7 million worldwide. In 2008, he reunited with Kate Winslet in the drama Revolutionary Road, which earned him several Golden Globe nominations.

DiCaprio’s projects were mostly big box office successes. His film Shutter Island (2010) earned $295 million. The same year, he also starred in Cristopher Nolan’s Inception, which earned DiCaprio $50 million salary- the highest pay yet received by an actor. He initially agreed to pay cut from $20 million and agreed on splitting first-dollar gross points. His risk paid off since the movie earned $825 million.

In 2012, DiCaprio starred in Quentin Tarantino’s western Django Unchained. During filming, DiCaprio was so into his character, that he didn’t notice that he had cut his hand on a glass and continued to play his part. Tarantino kept the take in the final movie. For his role, DiCaprio was nominated for his 9th Golden Globe Award. His fourth Academy Award Nomination and second Golden Globe win came from the movie The Wolf of Wall Street. DiCaprio eventually won the Academy Award in 2015, for his portrayal of fur trapper Hugh Glass in the drama The Revenant. For the role, he also won his third Golden Globe.

DiCaprio’s relationships have always been well-covered by the media. DiCaprio is also known for dating models. In 1997, he dated a singer, Emma Bunton. Later, he also was in relationships with models Kristen Zang and Emma Miller. Form 2000 until 2005, DiCaprio dated Brazilian model Gisele Bundchen. After this relationship, DiCaprio dated Israeli model Bar Rafaeli for five years.

DiCaprio currently owns a home in Los Angeles, and a has bought an island off mainland Belize with plans to create an eco-friendly resort. In 2005, his face was severely injured when model Aretha Wilson hit him with a broken bottle at a Hollywood party. She was sentenced to a two-year prison sentence.