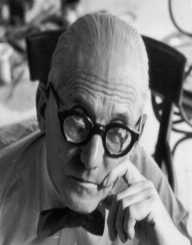 Le Corbusier was widely known as a professional architect, designer, painter and urban planner. He was one of the remarkable architects of the 19th-century. He used materials such as steel to showcase his architectural work. But he rose to fame because of his geometrical shapes when it came to constructing any building.

He was a respectable designer who invented five points of architecture that he wrote in his first book. That is what he used to finalize his architectural designs. His works decorated parts of America, Europe, and India.

Le Corbusier was a middle-length man with a slender physique who wore wide sunglasses 24/7. Le defined high status the moment he came to realize his architectural talent. He shook the world and beyond for nothing else than his incredible art and out of world design. In short what he left behind was more important than life itself.

Le Corbusier managed to publish over 70 books that entailed his projective lifestyle. Not to mention, he stood firm where he was allowed to complete fifty buildings. But Le is still remembered not because of his designs, but his noble qualities. His architectural skills were up to the mark, but he mostly fitted as an architect of order and peace. He acquired these qualities right from his childhood life.

On October 6, 1887, Charles-Edouard Jeanneret was born in La Chaux-de-Fonds in Switzerland. At 13 years old, he attended the town’s Art School where he learned artistic skills including engraving. He wanted to become a watchmaker, but his teacher taught him several structural studies. It was here that he opted to concentrate on the study of architecture.

Le’s first project began in 1907 when he designed his first house. He then toured Paris, Munich, and Italy where he gained his artistic skill under Peter Behrens and Auguste Perret. This is what made him create the five pillars of architecture. He had an urge for architecture that drove him to define different spaces and areas.

Le Corbusier invented Modulor that devised new systems of measurements. The masterpiece invented a series of numbers that he called The Fibonacci series. He later moved to his native land where he served as a teacher. After a short period, he started to showcase his architectural skill. He then traveled to Paris in 1917 where he acted as an architect for government projects. His works entailed painting and designing.

Early in 1918, he met an eminent painter, Amedee Ozenfant where came up with their first book titled Après Les cubism. It is here that they came up with an artistic movement that was known as Purism. He then teamed up with Paul Dermeee, and he published his first journal titled L’Esprit Nouveau. He later published another architectural book in 1923 that he came to release afterward.

In 1928 Le Corbusier concentrated more on furniture design as well as painting contracts. He later focused on urban planning, and it was here that he came up with La Ville radieuse book in 1935. In the mid of 1950, he continued to construct as well as plan various buildings in India. Some of his major works included the Villa Savoye in Paris that he designed in 1931 and The Open Hand Monument in India.