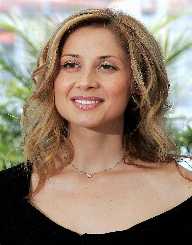 Lara Fabian is a Belgian-Canadian singer who represented Luxembourg at the Eurovision song contest in 1988.

Lara Fabian was born Lara Crokaert. She was born in Etterbeek in Belgium on 9 January 1970. Her father Pierre Crokaert is Flemish Belgian and her mother, Maria Luisa Serio is a native of Sicily.  Fabian spent the first five years of her life in Catania in Sicily and grew up with Italian as her first language. Fabian returned to Belgium and began singing and dancing at age eight. She wrote her songs throughout her ten years of formal training. Fabian includes Barbara Streisand and Queen in her list of musical influences.

Lara Fabian began her career with the single "L'Azizaestenpleurs" / "Il y avait” in 1986 and entered many European contests. She was invited by the Luxembourgish TV station, RTL TéléLëtzebuerg to represent Luxembourg in the 1988 Eurovision Song Contest. Fabian finished fourth behind eventual winners Switzerland, represented by Celine Dion. Her song from the contest “Croire” sold half a million copies.

In 1990, Fabian moved to Canada and started a music label with Rick Allison. She released a self-titled album in French which eventually went platinum in Canada. Her breakthrough came with her 1993 album “Carpe diem”, which went gold after three weeks and triple platinum the following year. Fabian provided the voice for Esmerelda in the French release of Disney’s The Hunchback of Notre Dame in 1996. Fabian also became a Canadian citizen in 1996. Her 1997 album “Pure” was even more successful. It sold 2 million copies in France and went platinum after just two weeks.

A live album was released in 1999 which debuted at number one in France, this secured Fabian a contract with Sony. Under the Sony label she released her first English language album titled, “Lara Fabian”. Fabian’s first English single, “I Will Love You Again” reached number one in the Billboard dance charts. Fabian also recorded songs for film soundtracks and the most notable being “For Always” for the film A.I: Artificial Intelligence. Fabian’s fourth album, Nue, again reached number one in France and number two in Belgium. Her second English album, “A Wonderful Life”, was not commercially successful.

Lara Fabian has one daughter who was born in 2006. Fabian married Italian musician Gabriel Di Giorgio in 2013.

The Felix Awards (Awards for music and humour in Quebec) named Fabian Female Vocalist of the Year for 1995 and awarded her Popular Album of the Year for the album “Pure.” The World Music Awards named Fabian the Best Selling Benelux Artist twice, 1999 and 2001. Six of Fabian’s albums have reached number one in at least one country. Nine of her albums and the single, "Réquiem pour un fou," have achieved platinum status. Fabian has sold 13 million records worldwide and is the bestselling Belgian singer of all time.