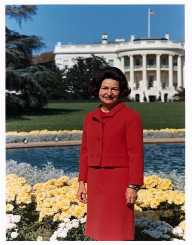 Claudia Taylor was famously known as Lady Bird Johnson. He was the first lady of the United States of America between 1963 to 1969. She was married to the thirty-sixth president of the United States. She was known to have participated in many projects to beautify Washington D.C. as well as many other cities and national highways. She was an environmentalist and a well-educated lady at that time.

Claudia Taylor was known to be an able manager as well as an investor. She owned radio stations as well as a TV station. Thus made her family become a millionaire at her time. She also helped her husband manage his office while he was away in the Second World War. She got two honors in the United States – the Congressional Gold Medal as well as the Presidential Gold Medal.

Claudia Taylor was born on the 22nd of December 1912 in Harrison County, Karnack, Texas. She was born to Thomas Taylor and Minnie Taylor. She was named Claudia by her maternal uncle, Claud. Her nickname Lady Bird originated from a compliment made by a nurse. Her father was a wealthy businessman, but her mother died while she was 5.

She later had two stepmothers and was mostly brought up by her maternal aunt, Effie Pattillo. She finished her high school at Marshall High School before studying in Saint Mary’s Episcopal Schools for Girls. Later on, she got a degree in journalism in 1934 and a degree in history major in 1933 from the University of Texas.

One thing about Claudia Taylor is that she had always wanted to pursue a career in media before she got introduced to Lyndon Baines who was then a young and upcoming politician. The duo got married in 1934. Lady Bird used a considerable amount inherited from her mother’s estate to launch her husband congressional campaign which he won. However, during the Second World War, Claudia Taylor managed her husband’s congressional office while he was away fighting in the Second World War.

She was one of the greatest investors as she purchased a radio station and expanded her business in 1957 by purchasing a TV station. Thus, she made her family millionaires. Jon Kennedy chose Lyndon B as his running mate during the 1960 presidential election. At that period, Claudia Taylor worked hard for John Kenedy to win the election for her husband to become the vice president. The party eventually won, and she became the wife of the Vice President. Following Kennedy’s assassination, she became the First Lady after her husband succeeded the assassinated president. In 1964, her husband ran for a full term election and won. She initiated the plan to beautify the national highways, Washinton D.C. and a host of others.

She also supported the Beautification Act which was later referred to as Lady Bird’s Bill. She promoted the Civil Rights Act as well as the preparation of the Underprivileged pre-school kids. In 1969, she established Texas Highway Beautification Awards which hosted annual award ceremonies for twenty years awarding winners.

In 1970, her book A White House Diary was published. This diary portrays and shows her encounter as the First Lady. Claudia Taylor became a member of The University of Texas System of Regents for six years. She was later appointed in 1977 by Jimmy Carter in the President’s Commission on White House Fellowship. She held membership in numerous organization and committees which include International Conference Steering Committee.

She also became the trustee for the National Geographic Society. Later in 1982, on the eve of her 70th birthday, she set up National Wildflower Research Center. This center was to research, protect, preserve and plant native species of flowers in the different landscape in a special and planned way. The center was named Lady Bird Johnson Wildflower Center. She chaired the Center until her death.

Her major works reflect in her investing strength. The ability to purchase radio and tv station which brought the family their success is remarkable. Claudia Taylor also played a major role in ensuring that the Washington D.C., as well as other areas in the States, are beautified. She was known for playing an important role as the First Lady in advocating for the Highway Beautification Act. This Act was often referred to as the Lady Bird’s Bill.

Lady Bird Johnson married in San Antonio, Texas on the 17th day of November 1934 in the St Mark’s Episcopal Church. She married Lyndon Baines Johnson that later became the 36th President of the United States. She gave birth to two daughters – Lynda and Luci. She also had seven grandchildren and 11 great-grandchildren. She, however, gave up the ghost at age 94. She was buried next to her husband at the family’s private cemetery.