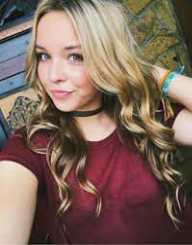 Kylee Renee Clark was born on June 21, 1999, in California. When she was young, her family moved to Texas. Her parents are Heather and Barrett Clark. She also has two brothers, Collin and Scott.

Kylee Renee has loved music ever since she was a child. When she was still very young, only nine years old, she taught herself to play the piano. As she continued to play the piano, she learned countless song covers (mostly focusing on pop music), and she has even written a few songs of her own.

During her short singing career, she has collaborated with other singers, such as Loren Beech.

Kylee Renee began to gain internet fame when she started to post videos of herself singing covers of famous pop songs on websites like YouTube and YouNow. She has over 60,000 subscribers on YouTube (with almost 6,000,000 total video views) and over 200,000 fans on YouNow. Some of her most famous covers are of songs by other female singers, Taylor Swift and Meghan Trainor. Once her fame with covers began to grow, she started to post more of her original songs. She has also sung with some of her friends, Madeline Phillips and her best friend, Taylor. Some of her popular songs are listed below.

Paparazzi
Carousel
Problem
My Daddy’s Got a Gun

Aside from YouTube and her other social media accounts that revolve around her singing, Kylee Renee is also famous on another website, Musical.ly. She has over 450,000 fans on this website. On this site, instead of singing, she posts videos of herself lip syncing (pretending to sing) to famous songs. She also has another YouTube Channel, Kylee’s Life, that focuses more on her everyday life rather than on her singing. Kylee Renee also posts many pictures of herself and her friends on the popular picture sharing site, Instagram. On this site, she has almost 200,000 followers. She also has a twitter account, which has over 100,000 followers.

Kylee Renee didn’t just keep her fame online; she also showed off her singing skills in public. In 2015, she signed up for a talent competition in her hometown, Rockwall, Texas’s own Rockwall’s Got Talent contest. She did not win the contest, but she did earn the second place prize for her music.

Kylee Renee and her boyfriend, Edwin Burgos, went on a tour together in 2016. The couple is considering doing a tour based on their relationship. They have also made a fair amount of money selling merchandise with their ship name “Kedwin.”

In 2016, Kylee Renee began dating another social media sensation, Edwin Burgos. The star loves to post videos of himself on YouTube and YouNow. The couple met online, and Edwin claims he loved her right away. The two first met in 2015. They were friends for a few months until they started to officially date in October 2015. The couple makes their long-distance relationship works, which helps to keep themselves, and their fans, very happy.