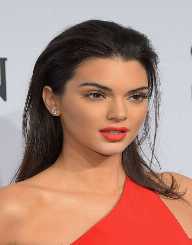 American television personality and model Kendall Jenner was born in Los Angeles, California on the 3 November 1995 to Bruce (now Caitlyn) Jenner and Kris Jenner. She has a younger sister, Kylie and eight half-siblings.

Jenner was homeschooled and was also a pupil at Sierra Canyon School in Los Angeles. She graduated in 2014.

Kendall Jenner appeared in her family’s television reality show Keeping Up With The Kardashians. When Jenner was fourteen, she began modeling and was signed up with Wilhelmina Models. After appearing in the Forever 21 advertisements, she found success as a model.

As well as a successful photographic model, Kendall Jenner is also a runway model and is one of the highest paid models in the fashion world. She has appeared on numerous magazines covers. Jenner has branched out into creating her brands. In 2017, she was voted the Fashion Icon of the Decade.

Kendall Jenner is unmarried and has said that she is a shy person who prefers to keep her own life private.