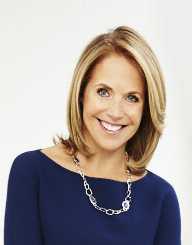 Katie Couric is the real definition of a never give up trait. Right from the University of Virginia her talent was visible even to the unknown. She came to break a record in 2006 as the first woman to broadcast at the ‘CBS Evening News’ all by herself. Before then her career started way back when he joined American Broadcasting Company ABC. For seven good years, she climbed to the higher rank and went to serve as a CNN reporter. Even then, Katie showed her stance when she opted to take another turn. Let’s take a look at her life, childhood, and achievements.

On January 7, 1957, Katherine Anne Couric was born in Arlington, Virginia to Elinor and John Martin. Her father was a renowned public relation executive and a journalist. She enrolled at the University of Virginia in 1979 where she received a degree in American Studies. She then moved to Washington, D.C to begin her television career.

Katie landed a desk assistant position at ABC under Sam Donaldson. After a short pause, she began to work at the Cable News Network NCC. For seven years she devoted her whole self to the CNN bureaus as an on-air reporter. She later went back to Washington in 1987 where she landed a reporting job at NBC station. In 1988 Couric commenced as an assistant reporter at the NBC News in Washington. For the next three years, she covered the Persian Gulf War and the United States invasion of Panama. She also managed to create an NBC morning show titled ‘Today.'

In the mid of 1991 Couric was hired by the NBC executive as a co-anchor. Katie brought the broadcast alive, all thanks to her charming and pleasant demeanor. Her journalistic style was one of a kind. While still on her early years on ‘Today’ she administered high ranked interviews with prominent individuals such as Anita Hill, Colin Powell, and George Bush. Her straightforward approach proved that she had the key to make it happen wherever she went. Another show emerged in 1993 titled as ABC’s Good Morning America. The public ratings manifested that it was the most-watched show of all times.

In 1993 Katie also co-hosted a third prime-time newsmagazine with the help of Tom Brokaw. In all, he moved back to her daily show where she dominated the morning view. In 1997, her co-host Gumbel left the Today news where Matt Lauer replaced him.

Katie’s spectacular success made her air at the Today broadcasting news till the 1990s.In 1998 she came to sign a four-year contract with the NBC. The same year Katie’s personal life haunted her. Her loving husband, Monahan who was a legal analyst for the NBC News died after suffering from colon cancer. After her partner’s sudden death, she campaigned all over to uplift the cancer research centers. As part of her dedication, she directed a television series that raised awareness of the disease. She went further and did a colonoscopy test on-air just to pass an important message to other viewers.

She later published a children’s book in 2000 titled The Brand New Kid. It became the number one selling books in New York Times for three weeks. She followed it up with the Blue Ribbon Day children’s book that showed tremendous success in 2004.She then released The Best Advice I Ever Got book.

In the mid of 2011, Katie signed a long-term deal with ABC where she began a talk show titled Katie. Its launch welcomed another terrific show called Dr. Phil that was introduced in 2002.In all; the show was later canceled after its third season. She then signed a deal with Yahoo as a global news anchor in 2014.Here she masterminded the traditional anchor role of conducting live interviews and reporting live events. She also got a chance to host the series World 3.0 as well as Now I Get It.

Katie Couric was blessed with two daughters with her first husband, Jay Monahan. In 2006, she dated Brooks Perlin, but they later separated in 2011. She then went public with her relationship with John Molner. They got engaged in 2014.