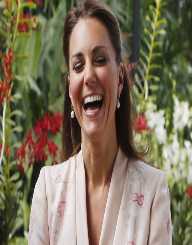 Kate Middleton is the current Duchess of Cambridge. She is the wife of Prince William, Duke of Cambridge, second in line to the British Throne.

Kate Middleton’s full name is Catherine Elizabeth Middleton; she was born on 9th of January, 1982, at Royal Berkshire Hospital in Reading.

Kate Middleton's parents Michael and Carole worked as a dispatcher and air stewardess then. Kate has younger sister Philippa (Pippa) and younger brother James. Kate was christened at St. Andrew’s Bradfield in Berkshire.

The Middletons lived in Jordan for a period, when her father worked for British Airways until 1986. Kate Middleton's parents started Party Pieces in 1987, the postal party service was successful and made them millionaires.

Hence Kate Middleton and her siblings were sent to private schools.

Kate studied at St. Andrew's Prep School before moving onto Downe House. She later left the all-girls boarding school due to bullying and moved to co-ed school Marlborough College. Kate did well academically, passing her exams with high marks.

Kate Middleton enrolled in University of St. Andrews in Fife, Scotland to major in Art History in 2001. Kate met Prince William of Wales in St. Salvator's Hall, the dormitory he was in.

Kate Middleton graduated in 2005 from the University with an undergraduate Masters of Art, focusing on the history of art.

Kate Middleton was dating Rupert Finch in 2001 when she and Prince William first met. They became friends, as they shared certain classes together, she would take notes when he was absent. Kate broke up with Rupert Finch after his graduation in 2002.

By 2004, the media had caught on that Kate and William were dating, and hounded her, prompting warnings from the royals and her lawyers. The press decided to refrain from publishing stories of her.

Kate Middleton was spotted in several royal weddings and events as their relationship was frequently off and on.

After graduation, Kate Middleton had trouble finding employment due to her reputation. She managed to find work as an assistant accessories buyer with clothing chain Jigsaw in 2006. But she left to pursue an education in portrait photography.

Prince William proposed to Kate Middleton in Kenya during 2010, using his mother’s engagement ring. Clarence House announced the engagement a month later, and the wedding was held in Westminster Abbey on 29th of April 2011. Before her marriage, the Queen conferred her with the title of Catherine.

Kate Middleton was pregnant with her first child in 2012, giving birth to Prince George Alexander Louis on 22 July 2013. She also gave birth to daughter Princess Charlotte Elizabeth Diana on 2nd of May 2015.

Kate Middleton suffers from hyperemesis gravidarum for both pregnancies, requiring hospitalization. She had canceled most official engagements during her state of severe morning sickness.

As a member of the royalty, Kate Middleton has to support some charities of her choosing. Kate promotes many art and children organizations including The Art Room, East Anglia’s Children’s Hospice, Place2Be and many more.

Kate Middleton is also the patron of the Lawn Tennis Association and Croquet Club. With her husband and brother in law, Kate is joint Patron of 100 Women in Hedge Fund’s Philanthropic Initiatives.

For their wedding, both Duke and Duchess set up a gift fund via The Foundation of Prince William and Prince Harry, encouraging people to donate money to twenty-six charities of the pair’s choice. Kate Middleton also volunteers in the Scout Association in North Wales.