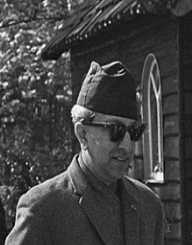 Mahendra was homeschooled as a child. He was taught by private tutors, mostly within the walls of his parent's palace. In his classes, he studied average subjects like math, science, and history. He also studied specialized subjects like politics.

In 1956, when Mahendra was 36 years old, his father, King Tribhuvan, died. Because of this tragic event, it was now time for Mahendra to ascend to the throne. He was officially coronated as the new king of Nepal on May 2, 1956.

During the 1950’s, the country of Nepal was going through tough times. Some of the citizens of the country (primarily the Rana people)  had begun to revolt against the government. Previously, the Rana family had been the ruling family of Nepa. However, in 1950, their reign had come to an end. Since then, the Rana people were working within the Congress of Nepal. However, this didn’t do much to ease the tension within the country. As Mahendra took the throne, tensions with this group, and others, continued.

In 1960, Mahendra made some drastic changes in the government of Nepal. He did this because he claimed that the government was fostering corruption and anti-nationalist sentiment. In this year, he suspended the constitution, dissolved parliament, arrested the Prime Minister (Bishweshwar Prasad Koirala), arrested several other government officials, put reforms in place, and founded the Panchayat System.

A new constitution was not created until 1962. This new constitution made it so there would not be a political party in Nepal. It was around this time that the Panchayat System was rigorously used. There were four levels of this system: village assemblies, district assemblies, zone assemblies, and the National Panchayat. Each assembly elected their mayors and other leaders that would contribute to meetings that would debate what should be done within the government. Some of their ideas would be made into bills that King Mahendra would either agree with or veto.

Later on in the early 1960’s, Supreme Court members were appointed. The people of Nepal had some power within this court. Some of King Mahendra’s ideas (mostly in relation to possible changes in the Constitution) could be debated. However, King Mahendra still had most of the power in Nepal, which was something that a royal had not had in over 100 years.

In 1963, he created the New Civil Code, which was created to protect the rights of the poor, women, and children, in Nepal.

In the mid to late 1960’s, several reforms were made in Nepal under King Mahendra’s leadership. New work projects and factories were made in the country, which lowered the unemployment rate. One of his projects was creating the Mahendra Highway, that improved trade in Nepal.

In 1964, King Mahendra also created the Land Reforms Act, which helped to protect the rights of landowners in Nepal, especially the lands that were owned by farmers.

Near the end of his reign, King Mahendra tried to improve the general welfare of the people in his country. Educational, artistic, and sports-related programs were introduced around the country.

In the 1970’s, Nepal’s relationship with other countries began to improve. Some of the countries that Nepal had agreeable relationships were India, China, as well as many other Asian countries.

All of King Mahendra’s awards and accomplishments are due to his actions as a political figure. Some of his most impressive awards are listed below.

In his own country, he was a sovereign of the following orders: Gorkha Dakshina Bahu, Nepal Pratap Bhaskara, Nepal Taradisha, Ojaswi Rajanya, and Tri Shakti Patta.

King Mahendra married Indra Rajya Laxmi Devi in 1940. The couple later went on to have four children together: Birendra, Dhirendra, Gyanendra, Sharada, Shanti, and Shobha. Sadly, Indra died in 1950. King Mahendra later remarried to Ratna Rajya Laxmi Devi (who would later become the Queen of Nepal after Mahendra’s coronation) in 1952.

King Mahendra died on January 31, 1972, in Bharatpur, Nepal. The cause of his death was heart failure. He was 51 years old when he passed away.  His son, Birendra Bir Bikram Shah, was coronated and began king in 1975.