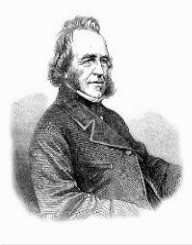 Joseph Paxton was born on 3rd August 1803, into a farming family. He had six brothers. Not much else is known about his family in those early years.

At 15, Joseph Paxton went to work for Sir Gregory Osborne Page-Turner, as a garden boy. Over the ensuing years, he worked in several gardening jobs, until, in 1923, he managed to get himself a position at Chiswick Gardens, owned by the Horticultural Society.

Nearby to Chiswick Gardens, lived a Duke called William Cavendish. His property was called “Chatsworth.” Cavendish met Paxton while he was working at Chiswick Gardens, and was taken by his enthusiasm and knowledge. Within a short time, Cavendish had offered Paxton the position of head gardener at Chatsworth, which Paxton accepted. Chatsworth had the reputation of having the best kept gardens in the area.

In 1832, he developed a keen interest in greenhouses. He designed a series of buildings to replace the old, run-down buildings that had been used beforehand. Glasshouses at the time were only very new, and not being used, so Paxton’s design was ground-breaking and was the forerunner to modern-day greenhouses. Paxton had come up with a design that allowed maximum light in, and let the water drain away.

In 1849, Paxton was given a seedling of the Victoria Regia water lily. Seeds had been sent from the Amazon to England in 1836. Whilst the seeds germinated and grew into plants, they never flowered as the environment in England wasn’t warm enough.

Joseph Paxton passed the seedling to one of the young gardeners who worked with him at Chatsworth. The gardener used the greenhouse, and within two months the leaves of the lily had grown to four and a half feet in diameter. A month after that, the plant flowered for the first time in England. The plant continued to grow, and a more massive glasshouse had to be built to accommodate it, called the Victoria Regia House.

Paxton’s glasshouse construction was inspired by the design of the water lily’s leaves. His glasshouses were the first ‘prefabricated’ style of buildings, which would become common in later years.

In 1836, Paxton built what was called “The Great Conservatory” which was the largest glass building in the world at the time. During the First World War, though, many years later, the heaters were not used because of the cost, and the plants died accordingly because they couldn’t cope with the normal cold weather of England. The conservatory was destroyed in the 1920s.

Joseph Paxton went on to build “The Crystal Palace” in 1851 to house the Great Exhibition in the same year.

Joseph Paxton was responsible for several works, including a monthly magazine called “The Horticultural Register,” “Magazine of Botany, the “Pocket Botanical Dictionary” and “The Flower Garden.”

In 1836, Joseph Paxton cultivated what would become “Cavendish bananas” in the greenhouses at Chatsworth. The bananas are one of the most widely grown and consumed type of bananas still in existence today.

In 1851, Paxton built ‘The Crystal Palace”. The Royal Commission was holding the Great Exhibition in 1851 and had run a competition for building designs. People from all over the world had entered, but none of the entries were entirely suitable. Paxton put his plans in at the last moment when he found out about it and was given the opportunity to construct the building. He had to draw and finalize the plans in nine days, which he did.

Exhibitors and visitors came from all over the world for the Great Exhibition, and many of them couldn’t believe a building could have so much glass and not have the need for interior lighting all the time.

The Crystal Palace was moved to Sydenham after the exhibition in 1854, but fire then destroyed it in 1936.

Joseph Paxton was fortunate, in that his employment at Chatsworth was such, that it allowed him to take on other work at the same time. In 1850, he was commissioned by one of the Rothschild family members to design “Mentmore Towers” in Buckinghamshire. It became one of the greatest country houses built in that period. He was then commissioned by one of the Rothschild’s cousins, to design a similar house near Paris, but was told it needed to be twice the size. Both properties still stand today.

Paxton continued to design buildings and gardens and was honored in 1860 by becoming part of the Kew Commission, which advised on possible improvements to the Royal Botanic Gardens. He was even under consideration to become the head gardener at Windsor Castle.

From 1854 until his death, Joseph Paxton served as a member of parliament. He retired from his position at Chatsworth in 1858, upon the Duke’s death, but continued to work on various projects afterward.

He also went on in the 1860s to become quite a wealthy man, due to successful speculation on the railway industry.

Queen Victoria awarded Joseph Paxton a Knighthood for his accomplishment of designing and building The Crystal Palace.

Whilst in his position of head gardener at Chatsworth, Joseph Paxton met his wife, Sarah Brown. He met her on his first day of employment, and they were married in 1827. They were together until Paxton’s death in 1865.

Joseph Paxton built the three most notable glass constructions in England, and the world, during his time. The Great Conservatory, Victoria Regia House, and The Crystal Palace. The residential area near where The Crystal Palace was relocated has been called by the same name, in honor of Joseph Paxton.

As well as the actual buildings, Joseph Paxton also cultivated Cavendish bananas, which are the most common and well-known bananas in modern society.