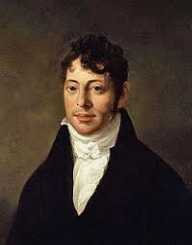 Joseph Grimaldi was born 18th of December 1778 in London, in the United Kingdom. Grimaldi's parents, Joseph Grimaldi and Rebecca Brooker, were both performers. His father was an actor and dancer, and his mother was a dancer and public orator.

Grimaldi's mother raised him by herself. His father was a philanderer and had several mistresses. He visited only on odd occasions. When Grimaldi was eight years old, his father moved in with the family. Joseph regularly beat Grimaldi and his younger brother.

Joseph Grimaldi's father groomed him from two years of age to perform in the harlequinade. His stage debut was in late 1780 at Sadler's Wells Theatre. In 1781, the manager of Drury Lane, Richard Sheridan, cast Grimaldi in a pantomime with his father. It was called The Wizard of the Silver Rocks.

From late 1781 to the end of March in 1782, Grimaldi acted like a clown in pantomime at Drury Lane. It proved very successful and cemented his place as a regular performer.

During the same period, he also performed regularly at Sadler's Wells. Drury Lane appealed to the upper class, while the working-class went to Sadler's Wells. Between the two venues, Grimaldi performed all year round.

The press acknowledged Joseph Grimaldi as a significant stage performer when he was six years old. In 1788, when Grimaldi was nine, his father died. Grimaldi became the primary breadwinner for the family.

Joseph Grimaldi continued to perform and establish himself over the next decade. In 1798, Drury Lane stopped holding its annual Christmas pantomime. Grimaldi joined the company at Sadler's Wells in 1799, and he made a strong impression with his performances.

He had begun to perform as a clown during this period, and he was proving very popular. In 1801, Drury Lane sacked Grimaldi after a disagreement. Grimaldi started performing at the Theatre Royal in Covent Garden. He also appeared at other theatres including the towns of Exeter and Kent.

Kemble from Drury Lane realized his mistake in sacking Grimaldi, and he gave Grimaldi his job back a few months later.

In 1802, Joseph Grimaldi became the resident clown at Sadler's Wells. The other clown, Dubois, resigned and went elsewhere. Grimaldi painted his face white, put red triangles on his cheeks, and created big red lips in a permanent smile. This "clown" look is still in use today by modern clowns.

Grimaldi continued to perform between Drury Lane, Sadler's Wells and Covent Garden for several years. He performed at smaller venues periodically as well.

Despite being a successful performer for all his life, in 1812, Joseph Grimaldi was almost bankrupt. It was due to his wife having costly spending habits. His accountant also stole money from him. Grimaldi took as much work as he could to improve his financial position.

In 1818, Grimaldi toured Liverpool, Manchester, and Scotland. He fell twice, which left him bruised and nursing strains. Grimaldi fell ill in 1820, and his career began its decline. When Grimaldi collapsed in 1821, his son, JS, took over the performances in place of his father.

In 1823, Joseph Grimaldi retired due to ill health. Soon after, with no income, Grimaldi fell into poverty. From 1828 to 1836, Grimaldi received money from charity benefits, which allowed him to live. Grimaldi died on 31st May 1837.

Historians acknowledge that Grimaldi was the most popular performer of his era. This was primarily due to him becoming a clown.

Joseph Grimaldi married Maria Hughes on May 1799. Hughes was a daughter of Richard Hughes, the owner of Sadler's Wells. She died while giving birth in 1800. The unborn child also died. In December 1801, Grimaldi married Mary Bristow, a dancer. They had a son in 1802.