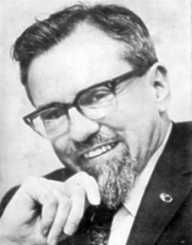 Josef Allen Hynek was an American Ufologist, Astronomer, and professor. Having directed the scientific research on UFO studies, he is best remembered for it. The U.S. Air Force had issued the research assignment. His research led to a system named Close Encounter classification. He developed his interest in astronomy especially occult at a young age. His mother read him astronomy books when he fell ill and had to remain in bed at a young age. In his teenage period, he would buy occult books while his friends were busy buying bikes and other stuff. An example of a book he bought for more than hundred dollars was The Secret Teachings of All Ages. Initially, in his astronomy studies, his main focus was to identify the flaw of science.

Josef Allen Hynek was born on May 1st, 1910 to Czech parents. His birthplace was in Chicago. His father made a living by making cigars while his mother was a grammar teacher at a local school.

J. Allen Hynek attended the University of Chicago. He received a B.S from the university in 1931. He later joined Yerkes Observatory for his Ph.D. studies in astrophysics. He completed in 1935. A year later in 1936, he enrolled at the Ohio State University. He studied Astronomy and Physics. His majors were spectroscopic binary stars and stellar evolution.

In 1936 J. Allen Hynek worked at Ohio State University. He was the instructor for astronomy and physics department. He was later upgraded to assistant professor in 1939. In 1941 he joined the Harvard College Observatory where he lectured at summer school. During his leave at Ohio State University, he worked at Johns Hopkins Applied Physics Laboratory. He assumed the role of a civilian scientist at the laboratory from 1942 to 1946.  This was the time of World War II. He helped those in the navy to come up with a proximity fuse.

In 1947 he was appointed as an astronomical consultant by the U.S. Air Force. He was to take on a research project to identify mysterious objects that passed Mount Rainer. This was following rumors that shiny unidentified objects had been witnessed to pass in front of that mountain. The war later ended, and J. Allen Hynek returned to Ohio State University in 1956 as a full-time professor. He also assumed the role of assistant dean and later left the university in 1956. He then joined the Smithsonian Astrophysical Observatory the same year. He worked alongside Harvard astronomer Professor Fred Whipple. His role in the International Geophysical Year project was to track an American space satellite.

In 1957 an artificial satellite namely Sputnik was successfully launched. J. Allen Hynek and Fred Whipple assured people of the safety of the satellite through press conferences. It was the first successful artificial satellite after other failed attempts hence people had to be assured of their safety. Upon completion of the satellite projects, he joined Northwestern University in 1960. He served as the professor and head of the astronomy department. He later established the Center for UFO Studies -CUFOS In 1973. In 1978 he retired from the Northwestern.

His first marriage that led to divorce was in 1932. He later wedded Miriam Curtis in 1942. Together they had five children Scott, Roxane, Joel, Paul, and Ross. He had grandchildren as well. His son Joel grew up to be an Oscar winner as visual effects supervisor. He won the Oscar for his work What Dreams May Come.

J. Allen Hynek took his last breath on 27th, April 1986 aged 75. He died at a Memorial Hospital in Scottsdale, Arizona after he had a brain tumor. Before his death, his greatest desire was to get to witness Halley’s Comet. He died a happy man after he witnessed Halley’s Comet that appeared before he died.