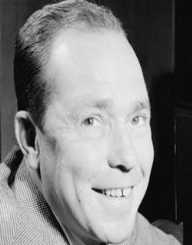 Johnny Mercer was an American lyricist, songwriter, and vocalist who authored over a thousand songs. His work is very versatile, varying from catchy tunes to sad love melodies, and it is mostly influenced by Southern music.

John Herndon Mercer was born in the city of Savannah, Georgia on November 18, 1909. His family was quite wealthy, with his father being an accomplished attorney.

From a young age, Mercer was exposed to different types of music. His mother often sang sentimental ballads, while his father opted for old Scottish songs. His aunt sometimes took him to see minster and vaudeville shows. His African-American friends and servants introduced him to black music.

Johnny Mercer studied at the private Woodberry Forest School in Virginia. There, he took part in the poetry club and served as a satire writer for the school newspaper. After graduation, he planned to attend Princeton University, but he had to give that up because of his father's failing business.

In 1928, Johnny Mercer relocated to New York City. He tried out acting and managed to get a few small roles. He soon found a day job at a brokerage house, while he spent his nights working on his real passion - singing and writing lyrics. His first published song was “Out of Breath (and Scared to Death of You),” that appeared in a musical revue called The Garrick Gaieties in 1930.

Mercer started to mingle with other songwriters to improve his skills, even meeting his idols Louis Armstrong and Bing Crosby. He soon began working as a staff lyricist for Miller Music. In 1932, he won a contest looking for unknown singers and became a vocalist in the Paul Whiteman orchestra.

Johnny Mercer had already written plenty of songs and collaborated with different people, but his first bigger success was the song “Lazybones” that he wrote together with composer Hoagy Carmichael. This finally gained him some respect from the songwriting community.

In 1935, Mercer decided to move to Hollywood with the goal of taking his career to the next level. He started writing songs to be featured in the film, but his first few tries did not achieve good results. His first big song was “I'm an Old Cowhand from the Rio Grande” which was performed in the 1936 film Rhythm on the Range. After this, his career finally took off properly. He wrote numerous hits, in collaboration with lyricists such as Harold Arlen and Jerome Kern, performed by prominent stars like Frank Sinatra and Bing Crosby.

In 1938, Johnny Mercer received his first Oscar nomination for Best Song for “Jeepers Creepers,” recorded by legendary singer Louis Armstrong. This was the first of the total of eighteen Academy Award nominations he would be nominated for. He scored his first out of four wins in 1946, for the song “On the Atchison, Topeka and the Santa Fe,” created for the film The Harvey Girls.

In 1942, Mercer co-founded Capitol Records in Hollywood, currently one of the most famous record labels in the world. He also co-founded Cowboy Records in Philadelphia.

In the following decades, the growing popularity of rock and roll started slowly replacing jazz, so Mercer's opportunities were slightly cut down. Still, he continued writing hits for films like Seven Brides for Seven Brothers and Breakfast at Tiffany's.

Apart from Hollywood, Johnny Mercer also wrote a few songs for Broadway plays. He also performed some of his songs and released Two of a Kind, a duet album with Bobby Darin.

Johnny Mercer passed away on June 25, 1976, from a brain tumor. He died in Bel Air, California, but he was buried in his hometown of Savannah, Georgia.

Johnny Mercer is considered one of the best lyricists in Hollywood history. The Songwriters Hall of Fame created the Johnny Mercer Award as the highest award a lyricist can receive. In 2009, actor Clint Eastwood produced a documentary on his life. The same year, a bronze statue of Johnny Mercer was erected in Ellis Square, Savannah, as a way to pay respect to his legacy.