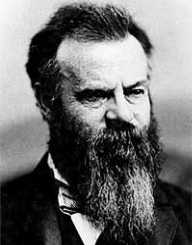 John Wesley Powell was born on March 24, 1834, in New York, United States of America. He was born to Joseph Powell and Mary Powell. His father was a farmer, tailor, and priest while his mother was a missionary. In 1838, his family moved to Jackson in Ohio. In Jackson, he met naturalist George Crookham who influenced his love for science, history, and literature. In 1846, his family moved to South Grove, Wisconsin. In 1851, his family moved again to Boone County in Illinois where he started teaching. His education became irregular as his family moved all the time. He attended Oberlin College where he studied Latin and Ancient Greek, but he never obtained a Degree.

In 1861, John Wesley Powell became a sergeant major in the 20th Illinois Infantry at Hennepin during the American Civil War. He later became the second lieutenant. He became the captain of the artillery company that he recruited at Cape Girardeau in Missouri. In 1862, he lost part of his right arm at the Battle of Shiloh. In 1863, he became a major after he returned to service. At the end of the war, he was made a brevet lieutenant colonel. In 1865, he became a professor of natural sciences at the Illinois Wesleyan University, Bloomington.

In 1866, John Wesley Powell became a lecturer at the Illinois State Normal University. In 1867, he was appointed as the administrative head of the Illinois Natural History Society Museum. He led several expeditions where he collected specimens and fossils. In 1869, he headed an expedition from Green River in Wyoming to explore the Grand Canyon and Colorado River. The expedition began in May 1869 and ended in August the same year. In 1871, he led another expedition from Green River travelling the Colorado River to reach Kanab Creek in the Grand Canyon. The expedition ended in 1872.

In 1874, John Wesley Powell established the Cosmos Club which advocated scholarship and civic activities. In 1875, he published the book ‘Exploration of the Colorado River of the West and Its Tributaries Explored in 1869, 1870, 1871 and 1872 under the Direction of the Secretary of the Smithsonian Institution’. It was republished in 1895 as ‘Canyons of Colorado.’ In 1876, he published the book ‘Report on the Geology of the Eastern Portion of the Uinta Mountains’. The following year he published his book ‘Introduction to the Study of Indian Languages, with Words, Phrases, and Sentences to be Collected’.

In 1879, John Wesley Powell published the book ‘Reports on the Lands of the Arid Regions of the United States’ which suggested the boundaries based on water resources and irrigation schemes. His book ‘Introduction to the Study of Indian Languages’ was published in 1880. In 1881, he was appointed as a director by the United States Geological Survey. He also became the first director of the United States Bureau of Ethnology. In 1891 and 1898, he published the books ‘Indian Linguistic Families of America, North of Mexico’ and ‘Truth and Error, or the Science of Intellection’ respectively.

In 1862, John Wesley Powell married Emma Dean with whom he had a daughter, Mary Dean Powell. He died on September 23, 1902, in Haven, Maine. His remains were buried at the Arlington National Cemetery. He died at the age of sixty eight.