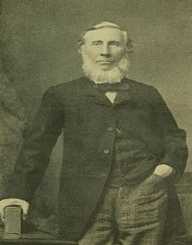 John Tyndall was born on August 2, 1820, in Leighlinbridge, Leinster, Republic of Ireland. His parents were Sarah and John Tyndall. He also had one older sister.

As a youth, John Tyndall attended local schools. In these schools he got his basic education, learning how to read, write, and do basic math. One of the special subjects he learned was surveying. While still in school, he worked with the Ordnance Survey of Ireland. He also worked as a teacher at Queenwood college for some years. He later went back to college to learn at the University of Marburg. He graduated from the school in 1851.

In 1851, John Tyndall began working as a professor at the Royal Institute in London. There, he focused on teaching physics and natural philosophy. While at the school, he researched in his free time. One of the subjects he studied was the heat that certain gasses in the Earth’s atmosphere (like oxygen, nitrogen, etc.,) could take in. He worked on this until 1859, when he finally figured out how much each gas could take in. It was also around this time that he had an idea that is similar to the greenhouse effect ideas that many scientists have now. He later named his idea the Tyndall Effect.

In 1864, John Tyndall began to use his idea on a smaller scale. He knew that the atmosphere was made out of many different gasses, which he already knew how to measure. Using what John Tyndall already knew about the atmosphere, he was able to measure the amount of carbon dioxide there was in human breath. This number was then used to find out how many anesthetic someone would need in a medical procedure. This would go on to advance surgical medicine.

John Tyndall retired from teaching when he was 66 years old. His researched slowed around this time too.

During his time as a teacher and researcher, John Tyndall wrote more than 100 scientific papers among a variety of different subjects (but with the bulk of them focusing on the Earth’s atmosphere and its many properties). He also published several books. Some of these books are listed below.

Faraday as a Discoverer

Hours of Exercise in the Alps

The Glaciers of the Alps

Louis Pasteur: The Vaccine Inventor: Life and Work of the Great Scientist (co-authored with Rene Vallery-Radot)

John Tyndall was awarded two awards in his lifetime: The Royal Medal (1853) and the Rumford Medal (1864.)

An award, the John Tyndall Award, was named for him by the IEEE Photonics Society and The Optical Society in 1987. The award has been given out once a year to someone who has contributed to the fiber optics technology.

John Tyndall was a modest man, and he made more money than he needed to be happy. He once toured the United States, giving lectures as he went. He earned a fair amount of money from this trip and donated much of it. One of the main organizations he gave to was the Irish Unionist political party.

John Tyndall married Louisa Hamilton in 1876. The couple had no children together. They were married until John’s death.

John Tyndall died on December 4, 1893, in Haslemere, England. The cause of death was an accidental overdose of sleep medication. He was 73 years old when he passed away.