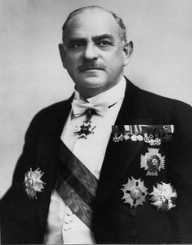 John Monash was a civil engineer and became a famous military commander during the World War I in the Australian army. John Monash was the commander of the 13th infantry Brigade before the war. After the war began, John became the commander for the 4th Brigade which was situated in Egypt.

John Monash is mostly remembered for his executive leadership skills rather than military qualities and always organized his soldiers in a way that was always strategic and beneficial. Courtesy of his training techniques and warring tactics, Monash enabled many important battles to be won.John was always respected and admired by not only his soldiers but many seniors. Postwar, Monash was still a respectable public figure and was appointed in various vital offices. Apart from his successful military career, Monash had university degrees in law arts, and engineering Monash worked as a civil engineer for a while.

Sir John Monash was born on 27th June 1865 in Dudley Street, Melbourne, Victoria. John's parents were Jewish namely Louis Monash and Bertha Nee Manasee. The family’s native language was German, and as a result, Monash became fluent in speaking and writing German. His family relocated to a small town called Jariderie in South Wales whereby his father owned a store. There Monash went to school at a public school, and from these early days, it was quite clear to many that he was quite an intelligent guy. At only 14 years of age, John was able to pass a matriculation exam and became the dux of the school when he turned 16.

Hence, the family moved back to Melbourne following advice that John would be able to reach his potential while there. In Melbourne, he attended Scotch College and was under the tutelage of Alexander Morrison. Monash joined the University of Melbourne where he graduated in 1983 with a master’s degree in Engineering. Later in 1895, Monash graduated from the same with a Bachelor of law degree and Bachelor of arts. John Monash's final academic qualification was a Doctor of engineering in 1921.

John Monash began his career by working as a civil engineer. John Monash worked with various contractors in projects like construction of bridges, railways, and legal matters. Also, Monash worked with Melbourne hour trust for a while. In 1904, Monash partnered with fellow engineer J.T.N Anderson whereby they became contractors and consultants. However, the partnership did not last and ended in 1905. Moving forward, he partnered with John Gibson and David Mitchell to come up with a company called `Reinforced Concrete and Monier pipe construction co.  The partnership later associated with an Australian entrepreneur to form `S.A Reinforced Concrete Company

During his work as an engineer, Monash was able to attain membership of `Institute of civil engineers’ in London. More so, John became part of `Victorian Institute of Engineers’ and later became their president.  He then joined `Melbourne University Regiment.’

John Monash's military career began when he was appointed as a lieutenant, serving at the North Melbourne Battery in 1887. John Monash later rose up the ranks to Captain in 1895 and became Major in 1897. As a result of his impressive military leadership, John was yet again promoted to the position of lieutenant-colonel in 1906 and served in the Intelligence Corps. In 1912, Monash was made the colonel of the 13th Infantry Brigade.

When the World War I began in 1914, John Monash served the chief censor in Australia. The `Australian Imperial force’ was later created and John was appointed as the commander of the 4th Infantry Brigade. The brigade consisted of various battalions, for example, the 13th, 14th, 15th, and 16th.Monash trained them, and they began their journey in December 1914. They arrived in Egypt in 1915, and they were based in the Heliopolis area. They worked briefly under Major General Alexander Godley who was in charge of the whole `New Zealand and Australian Division.’

In 1916 John Monash was made the major general and led the `Australian 3rd division’. Monash also led his team to the western and trained them intensively for the battles to come. Monash was involved in various battles for example `First Battle of Passchendaele’ and `Battle of Messines.’ Later, he served as a lieutenant general in 1918 and commander in charge of the `Australian Corps.’  John had vast knowledge in tanks, artillery, and aircrafts among others but lacked formal military training.  Also, John had exceptional leadership skills, and in 1918, he guided his troops in association with other forces, and they were able to win the `Battle of Hammel’ and the Battle of the Amiens.’ John registered many battle victories in 1918 in various areas.

However, John Monash's most significant effort in 1918 was through `Battle of Hindenburg line.’ The battle was an illustration of the war coming to an end, and in October the same year, a truce was proposed, courtesy of Prince Maximilian from Baden and the German Prince. After the war, Monash got back to his non-military profession and was made Director General of a newly constructed department called `Repatriation and demobilization.’  Also, he was appointed as the president of `state Electricity Commission of Victoria.’ Monash later took part in the formation of `Rotary club of Melbourne’ and had a leadership post in `Zionist federation.’

John Monash's last professional position was as a Vice-Chancellor at University of Melbourne, from 1923.

John Monash was key to winning major battles like `Battle of Hamel’, in association with other allied forces.He became one of the top-rated generals on the western front. He had exceptional organizational skills and was very sensitive to the welfare of the soldiers. He was made `Knight Grand Cross of the order of St Michael and St George’ in 1919 after receiving the `Knight Commander of the Order of the Bath’ award.

John Monash married Hannah Victoria Moss in 1891. Together, they had one child together called Bertha. Victoria Moss died a year after the world war as a result of deadly health complications. Monash is the author of a book called `The Australian Victories in France’ that was published in 1920.

John Monash died on 8th October 1931 as a result of a cardiac arrest. He was buried in a state funnel with thousands of mourners and was honored with a gun Salute. He was buried at `Brighton General Cemetery.’