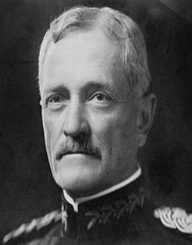 John J. Pershing was born on September 13th, in 1860. He earned his fame for leading the American Expeditionary Force during World War I.

John Joseph "Black Jack" Pershing was born on September 13th, in 1860. His birthplace was in Laclede, Missouri. Pershing went to West Point Academy. His father was a successful businessman. However, the family lost their assets when the panic of 1873 occurred. As a result, Pershing was coerced to work on their farm.

Upon graduating from high school, Pershing took a job as a teacher at the Prairie Mound School. Here, he taught African American students. He saved up some money and paid for his college fee. Pershing joined Missouri Norman School.

After graduation, John J. Pershing went ahead and served in the army fighting the Apache and Sioux tribes. He later served in the Spanish-American War where he was bestowed with a Silver Citation Star for his contribution. With the defeat of Spain, he was commissioned to the Philippines for about four years. During this period, he led the American troops to overcome the Philippines resistance.

By 1905, his courageous efforts in the army caught the attention of President Theodore Roosevelt. Consequently, the president requested the Congress to offer Pershing a diplomatic post where he could oversee the Sino-Russian War. In that same year, he crossed paths with his future wife, Frances Warren.

After completing his mission in Japan, he returned home and was nominated to the position of brigadier general. The Congress approved of his promotion which allowed him to skip about three ranks going above more than eight hundred soldiers who were his seniors.

In the early 1900s, his family migrated and went to reside in Francisco, California. After some time, John J. Pershing was sent to offer his services in Texas. Unfortunately, it is during this time when he received the sad news that his family had died. They perished in a fire leaving behind his six-year-old son.

Owing to his diligent services during the war, President Woodrow Wilson promoted Pershing to the post of Armies General in 1919. George Washington previously held this post. A few years later, he became a Chief of Staff. He continued to serve under this post until 1924 when he retired.

John J. Pershing tied the knot with Frances Warren and had four children together.